From EDGE ON THE NET:

The Sept. 26 mass took place at St. John’s University in Collegeville, the AP report said. Among those attending the mass were about 25 people wearing rainbow buttons as a protest against the Catholic Church’s teachings on homosexuals. Most of them were students from two area colleges, St. John’s University and the College of St. Benedict. St. John’s is a men’s school and St. Benedict is for women; both are Catholic colleges.

The students were galvanized by the recent mass mailing of anti-gay DVDs. They wore the buttons as a sign of disagreement with church policies regarding the treatment of gays and their families. "We wanted to make a statement to Archbishop Nienstedt, to stand in solidarity with GLBT students on our own campus that we don’t agree with what he’s doing," said Elizabeth Gleich, a St. Benedict’s sophomore.

Nienstedt reportedly responded by denying the Eucharist to those wearing the rainbow buttons, instead blessing them with the sign of the cross.

"My understanding of church law is that one is not to deny communion to anyone unless he or she is a public sinner, and that has traditionally been interpreted very narrowly," St. John’s professor Rene McGraw told the media. "My instinct was these are people who were in need, I’m supportive of them, therefore I’m happy to say Mass for them."

According to Dennis McGrath, a spokesperson for the archdiocese, withholding the sacrament of the Eucharist is one way the church punishes anyone who openly opposes its institutional teachings. "Going to the communion rail is the most sacred part of our faith, the Eucharist. We don’t allow anybody to make political statements or any kind of protest" during mass, McGrath said.

A local group, the Rainbow Sash Movement, has long been denied communion when its members have gone to mass wearing the multi-colored sashes that symbolize their support for diversity, reported the Minneapolis Star-Tribune on Oct. 5.

COMMENT: This vile action by Neinstedt goes beyond the normal stupidity and magical thinking of his type of power mad cleric and enters the realms of plain evil. To deny the sacrament is to usurp the authority of Jesus Christ. It is about the most unpriestly thing a priest can do.

He did not then say, "And I'm giving it to a bunch of power crazed bigots in funny clothes to decide who can share in it and who can't."

If I was a better Christian I would pray for Neinstedt's eternal soul although I fear it's already been signed over to the boss of the other team.

What a nasty man. 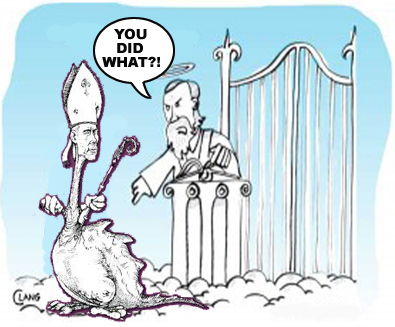