From THE CATHOLIC HERALD: 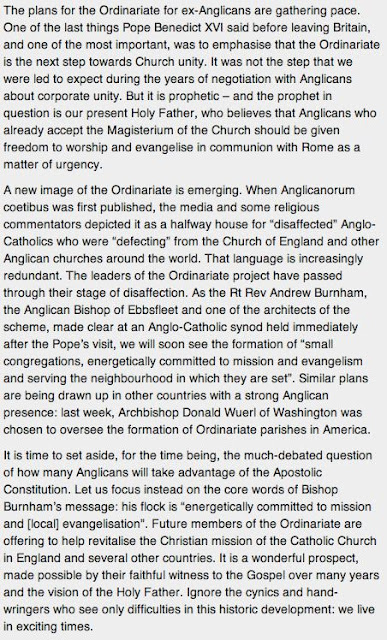 COMMENT: I personally know Andrew Burnham. But I haven't spoken to him for over fifteen years and maybe he has changed. He has certainly seemed to have changed his mind about gay people as he prided himself on being the straight friend of the local gay priests when he was working in Nottingham. He rang them all up on the night the women's ordination measure was passed by synod and told each of them that he would look after them. Now he wants to join a denomination that officially refuses to ordain gay men to the priesthood even if they are celibate. However, I also remember, and this where he may have undergone a miraculous transformation in the past decade or so, that the main thing that Andrew was "energetically committed" to was his own advancement.

It strikes me that the English Catholic church is extremely naive about these dissident Anglicans. They also vastly overestimate the Anglican congregations thatmay cross over, whose attitude towards mission is not what you would call enthusiastic at the best of times. In fact, these insular throw backs to the 1920s tend to have more gatekeepers in their congregations than the Plymouth Brethren. Mission involves welcoming the other and these congregations will only put up with the exactly similar becoming part of their unchanging world. These dissidents want to leave Anglicanism because Anglicanism is changing. They hate change. They hate the threat of change. They hate even the idea of talking about change. They are as far removed from the Pauline paradigm of mission, of being all things to all people, as you can possibly get.

Perhaps if the Roman Catholics had spent more time looking at the Anglican Church as opposed to looking down on it they would have a better understanding of the true nature of its Anglo-Catholic wing, especially in England. One thing is for certain, if they do welcome all Andrew Burnham's flock into their fold they are, in the words of The Flinstone's theme tune, going to have one hell of a "gay old time."