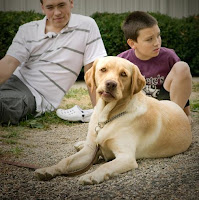 Logan Erickson will soon head back to his village in Alaska will a new "leash'' on life, thanks to sled dog racers and a pet food sponsor.

The 10-year-old boy has a severe case of autism, according to his parents, and can't be left alone in his hometown of Unalakleet, Alaska. But a new dog is about to help. Logan concludes his training Thursday with Juke, a yellow Lab trained to help children with autism. The training involves tethering Logan to Juke when he's outside so he can't wander off alone. Juke is trained to calm Logan when he's unsettled by nuzzling him and is also trained to track him by scent.

Dogs have a big impact on Logan, something his parents realized for the first time late last winter. He said his first word in nearly 7 years at the airport when he watched a family friend — Iditarod sled dog musher DeeDee Jonrowe — get on a plane with her dog, Miyagi.

His mother told the Dayton Daily News: "There was a storm raging, the howling winds and the waves and the ocean sounds were so tremendous, I think that DeeDee's dog was a calming effect. When she left with that dog, he wanted that connection."

Logan is speaking more since he's met Juke. That's all the thanks anyone involved in this wonderful effort needs.