The former Anglican bishop of the Murray was found guilty of disgraceful conduct by a church tribunal in Adelaide yesterday (29th. September 2010). The body rebuked him and recommended that he be prohibited from acting as a bishop.

Bishop Davies, who quit his position last week and received a $150,000 payment from the church, was not at the tribunal when it delivered its findings after a two-day hearing. He had faced nine internal charges brought by Adelaide Archbishop Jeffrey Driver and Bishop of Willochra Garry Weatherill relating to behaviour dating back to 2003.

The tribunal heard Bishop Davies had treated parishioners in a "dictatorial manner" and publicly expressed a desire to join the Catholic Church. It also heard he had aligned himself with archdeacon Peter Coote, who had been accused of sexual misconduct by three female parishioners.

The tribunal found Bishop Davies had allowed Mr Coote to continue to hold positions of responsibility in the diocese, used his powers to subvert proper professional standards processes and failed to act on recommendations for action against the archdeacon.

Bishop Davies tried to relinquish his holy orders on the weekend but failed because his attempt did not comply with church rules.

COMMENT: I understand that the charges brought against Davies were just the tip of a very large iceberg. Most priests in the Murray diocese will be well pleased that they will not have to put up with his aggressive and bullying behaviour anymore. And don't be fooled. Davies is not an old school bishop unable to cope with modern forms of leadership. He is just a nasty man.

Mind you, OCICBW... is not at all surprised by his appalling behaviour considering the company he keeps. Remember this from January 2008? 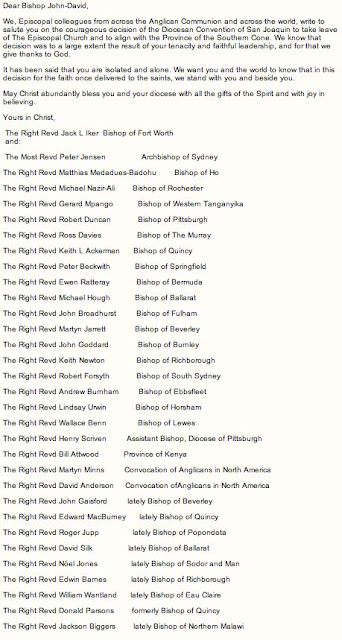 And this is a photograph of the Bishop Davies at the consecration of two "Traditional Anglican Communion" bishops back in 2005. 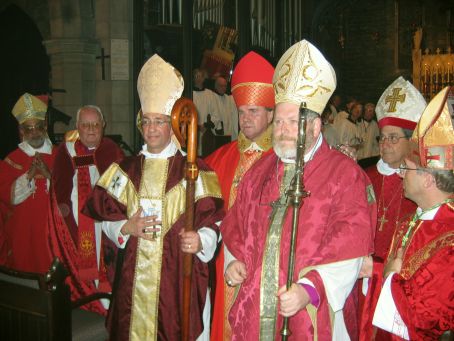 Now, if those liberal pansies down under had the balls to call the Head of the Family Firm to account as he has been far naughtier than Davies ever was, perhaps Anglicanism would have a chance of returning to the great nation of Australia.