This is an absolutely brilliant editorial, especially when you take into consideration that it was written in one of the most barbaric police states in the world.

From THE STANDARD (Zimbabwe):

After being chased from their churches in Harare and its suburbs members of Bishop Chad Gandiya’s Anglican congregation came up with a brilliant idea. They decided they could build other churches while the disputed ones were still being fought over in the courts.

One congregation in Chitungwiza had just completed building a church in Unit M when two weeks ago police with “orders from above” pounced. They ordered the congregants to leave the church and Bishop Nolbert Kunonga possessed it. Now he has given one of his followers the right to the property.

The police have been known to side with Kunonga in the whole Anglican saga but it defies logic that they would help him take possession of a church which is outside the disputed ones.

There is an interesting contradiction in Kunonga’s character. He claims his beef with the mainstream Anglican Church is about its support of homosexuality. He has ready support in this from President Robert Mugabe. But let’s take a look at Kunonga as a heterosexual male. According to him it is right to bar people from worshipping their God. He is prepared to have woman and children battered by thugs for the simple reason that they have congregated in a church that they built and have been praying at all their lives.

Homosexuality is a subject that is not talked about openly in Zimbabwe; I don’t understand it myself. But I have not heard of a single homosexual who has barred people from praying to their God.

It turns out that Kunonga is not the only rogue bishop in the world. He has now got support from an Ecuadorian bishop who has turned against the mainstream church. His name is Bishop Walter Roberto Crespo. He was in Zimbabwe recently and voiced his support for Kunonga and also launching a broadside at those in the Anglican Church who support gay rights.

It has turned out that Crespo is a fake bishop who is best known for dealing in arms. In trying to ship a consignment of arms to rebel guerrillas fighting the Colombian government Crespo used the Zimbabwe government’s name to cover up the covert supply of arms.

The obvious similarity between Kunonga and Crespo is that they both behave like alpha males in a troop of gorillas. Kunonga’s and Crespo’s propensity for violence reinforces this primeval desire to control. Is Kunonga really fighting the Anglicans over homosexuality or is he just fulfilling a primitive urge to dominate?

He is a disgrace to all heterosexual males who love to live peacefully with their neighbours who may have divergent sets of beliefs. 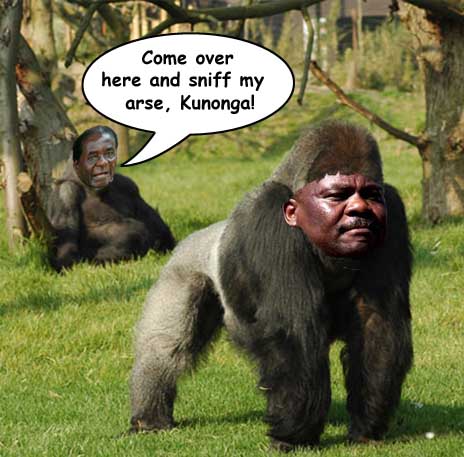