In August, the Irish woman, Jennifer Sleeman, 81, urged Catholic women to boycott this Sunday's Mass in protest of their treatment by the church. Half a world a way, a handful of Portland women responded.

"We had been talking amongst ourselves about how to be a woman and be a Catholic, dealing with that angst. Her call struck a chord with us. We needed to do something, to say, 'We've had enough,'" says Sarah Granger, who is active in St. Andrew Parish in Northeast Portland.

She and other women from St. Andrew's envisioned a "prayerful, positive public witness," not a protest or a boycott. "One Spirit - One Call" will unfold at 9:30 a.m. Sunday in the South Park Blocks in downtown Portland. The 90-minute program calls for prayers, a gospel reflection, and a litany of women saints. Organizers say they hope participants will attend Mass on Saturday night or stay downtown for a special noon Mass at the Downtown Chapel.

Organizers wrote to the archbishop of Portland, the Most Rev. John G. Vlazny, and told him of their plans. He says he is resigned that "One Spirit - One Call" would go on.

"I'm not happy about it," he says. "Whenever people are disturbed, it's a good idea to get together and pray. But my job is one that tries to promote the unity of the church, to encourage the church in our evangelization."

He says he has good relationships with women in the church. "I've tried my best to treat people with fairness." He understands that the women behind the Portland event have a list of grievances, but he thinks "ordination is at the bottom of it all."

"I have no authority to change that." The Catholic Church does not ordain women to the priesthood. "No other bishop, not even the pope can change that," Vlazny says. 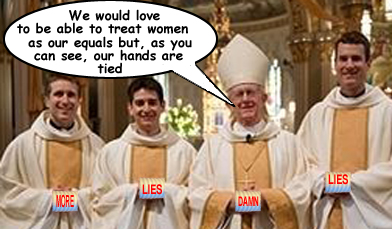