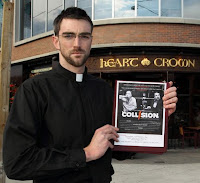 An Ottawa pub has refused to host an Anglican church group’s film night, fearing the movie’s debate over the existence of God may offend religious pub-goers.

The Heart & Crown pub says it decided to pull the plug on St. Alban’s Anglican Church’s showing this week of the movie Collision — a documentary featuring well-known atheist Christopher Hitchens and evangelical theologian Douglas Wilson — after seeing a pamphlet advertising the film. Mr. Munroe said he was “shocked” when he read a flyer advertising the film on the day the pub was set to host the church group, and immediately decided to cancel the reservation.

The flyer featured two quotes from the film’s stars. The first quote, from Mr. Hitchens, reads: “[Christianity] is a wicked cult, and it’s high time we left it behind.”

Mr. Douglas is then quoted as saying, “There are two tenets of atheism. One, there is no God. Two, I hate him.”

“We made the decision to cancel the reservation because, bottom line is, we just think that our business isn’t the forum or the environment for that type of movie,” said Heart & Crown Pubs spokesman Alex Munroe, who admitted he hadn’t actually watched the film.

Reverend David Robinson, a minister at St. Alban’s who organized the 50-person event and who hosts a regular book discussion called Theology on Tap at another local pub, said pubs are neutral spaces ideal for such discussions. He said he and his assistant told the pub’s booking manager the premise of the documentary when the room was reserved in August. He says they also directed her to a synopsis on the film’s website and even offered to provide a copy of the DVD to view in advance — an offer that was declined. He said management “seemed fine” with the event at the time.

He says when he asked the manager for an explanation as to why his event was being cancelled at the last minute, he was told several times it was because the pub was an “Irish Catholic institution.”

“I guess we were supposed to interpret that in some way,” he said.

The event was later moved to the church.

COMMENT: Later, in retaliation for the cancellation of the film night, the vestry of St. Albans cancelled both the "Bawdy Pub Song Singalong" and the darts match that were due to take place at their church later this month. Mr Munro, from the Heart and Crown, who had booked both these events stated that "This was typical anti-catholic bigotry," and "That the pope was going to get them good."

It is rumoured that Martin Scorsese has put in an offer for the film rights to the dispute.