From (THIS IS) TOTAL ESSEX: 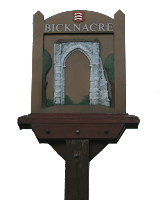 More than a hundred travellers' caravans descended on the small village of Bicknacre over the weekend – and more are still arriving. The travellers claim to be a Christian mission, and Mr Richardson (the farmer who has rented out a field to them) went to one of their services on Sunday.

"They hold daily services – it's very different from your traditional Church of England service but I really enjoyed it. They're very nice people and it was a great experience," he said.

But some local residents remain unconvinced about the sincerity of the travellers' spiritual message. Peter Phillips, who lives in the village, said: "One resident who lives alone feels so nervous that she has had to ask a relative to move in until the travellers move on.

"We are living in fear, as there are far more of the travellers than there are local residents. They have a crude sign hung on a lamppost suggesting they are on a mission, but they look and sound like typical travellers to me," said Mr Phillips.

And Deborah Finlay, who lives opposite the field, said: "It's absolutely spoiled my outlook – which is what we bought the house for. It's just ruined the whole atmosphere.

COMMENT: This is pretty much the same reaction that the first Greenbelt Festival evoked from local residents when it descended upon a pig farm outside the village of Charsfield near Woodbridge, Suffolk over the August 1974 bank holiday weekend. But those NIMBY locals were afraid of smelly hippies rather than smelly gypsies. There were probably more police at the first Greenbelt than festival goers. There was no trouble at all that year, but local residents were right to be apprehensive. The festival turned out to be the work of SATAN INCARNATE and would, in the future, invite Peter Tatchell to speak to young people about AIDS in Africa, thus destroying civilisation as we know it.

So OCICBW... fully backs the local residents in their hate campaign against these travelling ne'erdowells. We say, "Stop those God-bothering gypsies now, before they start doing what Jesus would do all over our beautiful, English countryside."