Beer-swigging, rudeness and terrible dress sense have all helped British women come out on top of a poll of the world’s ugliest women. British women won 22.4 per cent in the survey conducted by the Real Holiday Reports website, followed by American women with 16.7 per cent. The results suggest that while many British women are attracted to the ladette image, the rest of the world does not share their opinion.

Respondents to the survey complained that British women were unladylike, not shy about belching or passing wind in public. They are also unashamed to let their fat hang out of their clothing and often wear bikinis that are “too tight”. Specifically, respondents said British women were “rude”, “drink pints of beer like men” and “end up drunk in the gutter”.

Germany came in third place with 15.7% - which is probably entirely due to Our Erika's behaviour down her local on a Friday night. 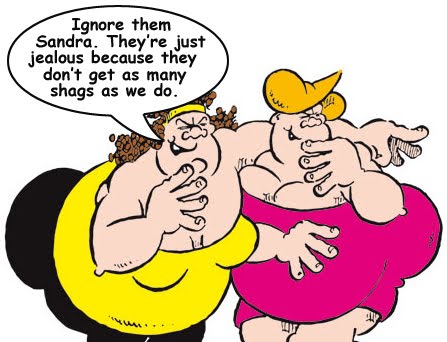