From THE COMMERCIAL APPEAL (Memphis, USA):

When pastor Steve Stone initially heard of the mosque and Islamic center being erected on the sprawling land adjacent his church, his stomach tightened. Then he raised a 6-foot sign reading, "Welcome to the Neighborhood."

The issue for Stone and the 550-person Heartsong Church in Cordova, came down to one question:

"What would Jesus do if He were us? He would welcome the neighbor," Stone said.

While plans for Islamic centers across the country and just miles away have triggered vitriolic responses and divided communities, here in Memphis it's been a peaceful process. While the 4,000-square-foot mosque is being completed, Heartsong has opened its doors to its neighbors throughout the monthlong observance of Ramadan. Under a gigantic cross constructed of salvaged wood, nearly 200 area Muslims have been gathering each night to pray.

"I've got fear and ignorance in me, too," said Stone, referring to his and some of his congregants' early apprehension toward the Memphis center.

But as members of the Christian congregation take the opportunity to sit in on Ramadan prayers and meet people at the nightly gatherings, much of that mystery and fear has dissipated.

"I think it's helped break down a lot of barriers in both congregations," said Islamic center board member Danish Siddiqui.

Without a place to call home, young Muslims are more likely to seek more radical interpretation of the Quran online, says Arsalan Shirwany, a board member and father of three.

When it is finished, the new facility will be a center for the whole community, and a place for interfaith cooperation, Shirwany said. "This is what we need to fight extremism."

COMMENT: The Cordova muslims, as well as the Heartsong Christians, are avery special bunch of people. To behonest, I can't imagine that many Imams in the UK would allow their congregations to worship in a Christian church, least of all under a huge image of the "Son of God." But, of course, I could be wrong on this. 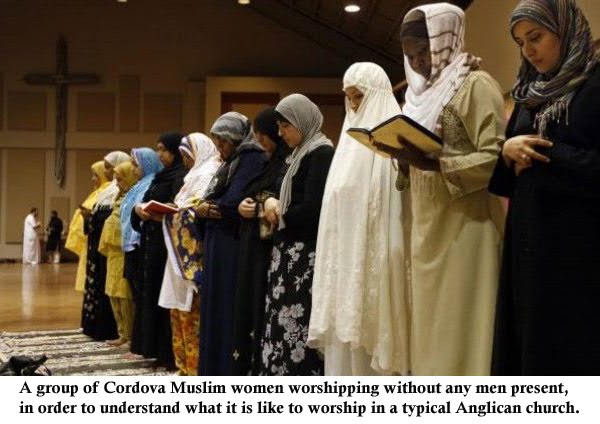 A big thank you to BooCat for sending me the link to this story.