1. In a spirit of unity and trust, and in an atmosphere of love the Primates of the Council of Anglican Provinces in Africa (CAPA) as well as Archbishop John chew, the Chairman of the Global South, which represents the majority of the active orthodox membership in the entire Anglican Communion, met during the 2nd All Africa Bishop's Conference in Entebbe, Uganda. We enjoyed the fellowship and the sense of unity as we heard the Word of God and gathered around the Lord's Table.

2. We gave thanks to God for the leadership of the Most. Rev. Ian Ernest, Archbishop of the Indian Ocean and Chairman of CAPA and for the abundant hospitality provided by the Most Rev. Henry Orombi, Archbishop of Uganda and the entire Church of Uganda.

3. We were honored by the presence of the His Excellency General Yoweri K. Museveni, President of the Republic of Uganda, for his official welcome to Uganda and for hosting an official state reception for the AABCH. We are very grateful to him for his support of the work of the Anglican Church in Uganda and for his call to stand against the alien intrusions and cultural arrogance which undermines the moral fiber of our societies. We recall his admonishment to live out the words and deeds of the Good Samaritan. We are also grateful to the Rt. Hon. Prime Minister of Uganda for his presence and words of encouragement to us.

4. We were very happy and appreciated that the Archbishop of Canterbury, the Most Rev. Dr. Rowan Williams, accepted our invitation to attend the 2nd All Africa Bishop's Conference. We were encouraged by his word to us. We also appreciated the opportunity to engage face-to-face with him in an atmosphere of love and respect. We shared our hearts openly and with transparency, and we have come to understand the difficulties and the pressures he is facing. He also came to understand our position and how our mission is threatened by actions which have continued in certain provinces in the Communion. We therefore commit ourselves to continuously support and pray for him and for the future of our beloved Communion.

5. We were very saddened with the recent actions of The Episcopal Church in America who went ahead and consecrated Mary Glasspool last May 2010, in spite of the call for a moratorium(1) and all the warnings from the Archbishop of Canterbury, the Standing Committee of the Anglican Communion and the 4th Encounter of the Global South.

This was a clear departure from the standard teaching of the Anglican Communion as stated in Lambeth Resolution 1.10. We are also concerned about similar progressive developments in Canada and in the U.K. 6. Being aware of the reluctance of those Instruments of Communion to follow through the recommendations of the Windsor Report(2) and taken by the Primates Meetings in Dromantine(3) and Dar es Salaam(4) we see the way ahead as follows:

A. In order to keep the ethos and tradition of the Anglican Communion in a credible way, it is obligatory of all Provinces to observe the agreed decisions and recommendations of the Windsor Report and the various communiqués of the past three Primates Meetings, especially Dar es Salaam in 2007. We as Primates of CAPA and the Global South are committed to honor such recommendations.

B. We are committed to meet more regularly as Global South Primates and take our responsibilities in regard to issues of Faith and Order.(5)

C. We will give special attention to sound theological education as we want to ensure that the future generations stand firm on the Word of God and faithfully follow our Lord and Saviour Jesus Christ.

D. We are committed to network with orthodox Anglicans around the world, including Communion Partners in the USA and the Anglican Church in North America, in holistic mission and evangelism. Our aim is to advance the Kingdom of God especially in unreached areas.

E. We are committee to work for unity with our ecumenical partners and to promote interfaith dialogue with other faiths in order to promote a peaceful co-existence and to resolve conflicts.

F. We are committed to work for the welfare of our countries. This will involve alleviating poverty, achieving financial and economic empowerment, fighting diseases, and promoting education.

7. Finally, we are very aware of our own inadequacy and weaknesses hence we depend fully on the grace of God to achieve his purpose in the life of his church and our beloved Anglican Communion.

1. The Windsor Report Section 134.1 The Episcopal church (USA) be invited to express its regret that the proper constraints of the bonds of affection were breached in the events surrounding the election and consecration of a bishop for the See of New Hampshire, and for the consequences which followed and that such an expression of regret would represent the desire of the Episcopal Church (USA) to remain within the Communion(2) the Episcopal church (USA) be invited to effect a moratorium on the election and consent to the consecration of any candidate to the episcopate who is living in a same gender union until some new consensus in the Anglican Communion energies.

The Windsor Report Section 144.3 We call for a moratorium on all such public Rites, and recommend that bishops who have authorized such rites in the US and Canada be invited to express regret that the proper constraints of the bonds of affection were breached by such authorizations.

2. Windsor Report. Section D. 157 There remains a very real danger that we will not choose to walk together. Should the call to halt and find ways of continuing in our present communion not be heeded, then we shall have to begin to learn to walk apart.

3. The Communiqué of the Primates Meeting in Dromantine (2005) Section 14. Within the ambit of the issues discussed in the Windsor Report and in roder to recognize the integrity of all parties, we request that the Episcopal Church (USA) and the Anglican Church of Canada voluntarily withdraw their members from the Anglican Consultative Council for the period leading up to the next Lambeth Conference.

4. The Communiqué of the Primates Meeting in Dar es Salaam in 2007. If the reassurances requested of the House of Bishops cannot in good conscience be given, the relationship between The Episcopal Church and the Anglican communion as a whole remains damaged at best, and this has consequences for the full participation of the Church in the life of the Communion. 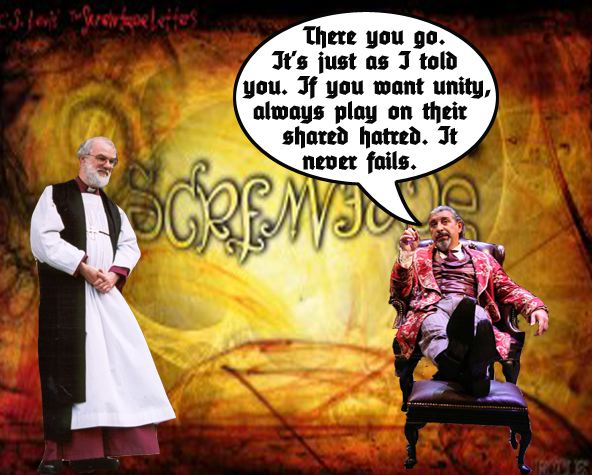