From THE CHRISTIAN INSTITUTE (sic): 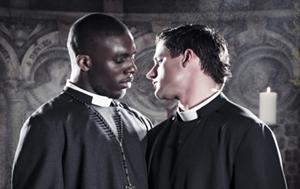 An ice cream advert which shows two male priests about to kiss with the line “We believe in salivation” is being investigated by the advertising watchdog. Complaints about the ad, for Antonio Federici Gelato Italiano desserts, have reportedly remarked that it is distasteful to religious believers.

Matt O’ Connor, from the ice cream group, said the ad: “celebrates homosexuality and refers to recent press where three priests in Rome were allegedly filmed as they visited gay nightspots. It’s also a live issue in the Church of England which may lead to a split in the church.”

The ASA agreed last month that a separate ad from the same ice cream company, which showed a nun and a priest about to kiss, was “likely to cause serious offence to some readers”. 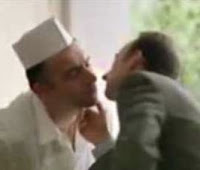 In 2008 a TV commercial for Heinz mayonnaise which featured two men kissing was pulled by the company after it caused nearly 200 complaints. The advert showed a family scene, but ‘mum’ is played by a man with a New York accent. During the ad he kisses another man who plays the father role.

Viewers said it was ‘offensive’, ‘inappropriate’ and ‘unsuitable to be seen by children’.