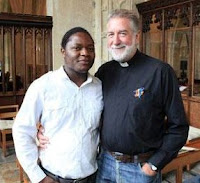 The Rev Colin Coward, a priest at St John the Baptist church in Devizes, Wilts, is to enter into a civil partnership with Bobby Egbele. The union has caused a stir among Christians because the couple plan a carefully-worded "blessing" service in church after the ceremony. Colin has also declined to confirm that he will remain celibate following the union, which is a requirement the Church of England asks of its ordained homosexual clergy. Colin said, he hoped his union would set a “visible example” to other homosexuals within the church.

He said: “My goal is for everyone within the church to feel comfortable with the situation because at the moment the majority of gay Christians marry secretly. It is a taboo subject but the church is now under huge pressure to change its stance and that pressure will only increase in the future.

“Clearly the blessing is going to be quite a sensitive issue. I know that many people will see it and view it with horror. But we are both deeply committed Christians so it would be unthinkable for me not to do it in church and not to do it with the congregation and with all of our friends. I hope my wedding will inspire others and set a visible example to the church that we are not afraid.”

Rev. Coward declared his homosexuality in 1991 before setting up the international gay and lesbian campaign group Changing Attitudes in 1995.

A spokesman for the Diocese of Salisbury confirmed it has permitted allowed the service but described it as ''separate'' from the civil ceremony.

He said: ''A Eucharistic service celebrating friendship is what has been sanctioned in this case. This is entirely separate from any civil partnership ceremony.”

COMMENT: It really would be brilliant if Colin and Bobby's "out in broad daylight" nuptials did inspire all the other married gay priests in the Church of England to go public in an act of solidarity with each other. But, I doubt it will happen. I have learnt through experience that the priests of the Church of England (gay, straight and undecided) are a bunch of complete wusses who are so scared of screwing up their promotion prospects that they will never ever stick up for a colleague in distress and will, in fact, stab a colleague in the back in order to look good in front of their bishop.

By the way, I had to alter the original words of the Telegraph article because it was full of childish remarks about "boyfriends" and the like. I don't know if the author, Richard Savill is gay or not. But he certainly bitches like an Anglo-Catholic luvvie who has just had his faculty request for another statue of Our Lady turned down by the diocese.

Now, if Colin and Bobby would make
their way to the dance floor......