St. Vincent's "Episcopal" School in Bedford has denied entrance to a child because her parents are married lesbians. Jill and Tracy Harrison attended the school's parent night on Tuesday, and now, just a few days before school starts Monday, the school is denying their daughter Olivia enrollment into the school. 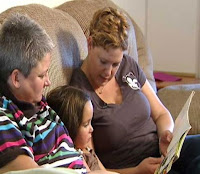 "I am horribly disappointed. In fact, we are in the 21st century and we are still dealing with this issue. We should just move on. Denying my daughter education based on who I end up sleeping with at the end of the day makes me furious," said Jill.

"It's hard to believe that a place that's supposed to take in and teach children about God and the basics of religion would actually discriminate against her because of who we are," said Tracy.

Though the school's handbook and website say that the school is non-discriminatory as to race, color, religion and national or ethnic origin, it doesn't stipulate that they won't discriminate based on the sexual orientation of a child's parents.

"We are a church affiliated with the Anglican Church in North America, and it is their policy that we don't provide services to individuals or families that do not behave properly. We're going off our canons that say 'The Anglican Church in North America affirms our Lord's teaching that the Sacrament of Holy Matrimony is in its nature a union permanent and lifelong of one man and one woman," said Kenneth Monk, head of the school.

COMMENT: "Behave properly?" So, is it an automatic expulsion if a child puts his or her elbows on the table at lunch?

THE DALLAS VOICE sums up the haters pretty well:

St. Vincent’s Episcopal School in Bedford says it would deny admission to the child of an unmarrried heterosexual couple, in the same way that it denied admission to the daughter of two lesbians. But we’re not buying it. Did they require straight couples to bring marriage licenses to parents night on Tuesday, where they discovered that both Jill and Tracy Harrison are women? What if the parents are in a heterosexual marriage but the father is a closeted homosexual? They’d probably be totally supportive of that.

Again, despite the name, this school isn’t Episcopal. It’s part of an Anglican group that left the Episcopal Church over the denomination’s acceptance of gays and lesbians. In light of that, this act of bigotry isn’t the least bit surprising. 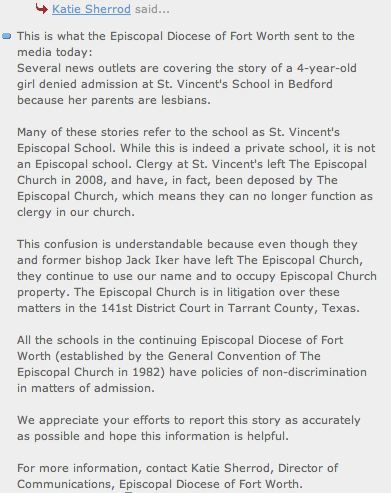