Here is a whole chunk of Tim Minchin in concert. It starts off with a song about God and stuff and this is followed by Tim riffing on religion. It ends with another (though this time, very short) song.

For all sorts of reasons I am a huge fan of Tim Minchin. I think he is a genius. Of course, I find the material you have just watched lazy, predictable and shallow. But that's because I'm a Christian and Tim is doing his iconoclast thingie on things that I hold dear. Or, to put it another way, he gets too close to the bone for my personal comfort. But that's fine. Humour is usually shallow and based on stereotypes rather than individuals. Even when a humourist attacks an individual the joke usually works because the individual is divested of his or her complexity and objectified as a stereotype that, the comedian hopes, will be seen negatively by the audience. In Tim's religion sketch he is basically saying that people who believe in a god and all that religious stuff are stupid and that, because he doesn't believe in anything other than what is empirically obvious and provable by scientific investigation, he is very clever, in deed. In fact, using the subject matter of the sketch, he cleverly implies that religious people have not "evolved" to the "superman" level of human evolution that he enjoys. The audience, who at this stage in Tim's career, only attend his concerts because they are already fans, identify with Tim, seeing him as a messiah figure, and, therefore, are encouraged by Tim, through this association,  to feel equally superior. But, again, I have no beef with this, it's how comedy works, in part, and I am a comedian. I guess that one of the reasons humour "evolved" in human beings was so that dangerous enemies could, by having the mick taken out of them, be made to appear less dangerous. I expect cavemen used to sit around the fire on a winter's night discussing how small the willies of the neighbouring tribe's warriors were. Nothing has changed much, except we are now a tad more sophisticated. For example, in the Anglican Communion, those who oppose change belittle their enemies by accusing them of having incredibly small orthodoxies.

I employ many of the same techniques as Tim Minchin. In particular I go for the shock response from my readers. I do this because I am both naturally inclined to be iconoclastic and also I choose to do so because it is a technique new to, or, in my opinion, a rediscovery of something ancient, in Christian comedy. It makes me stand out from the crowd and has given me some notoriety and an audience. But, even though I will go places with my comedy that other Christians fear to tread, at least in public, I still feel constricted as to the material I can post because of self censorship and pressure from my peers. For a start, because I am a religious person and, therefore, have to put up with being told I'm stupid by every trendy comedian on the British circuit and every jobbing humourist working in the British media, I feel loathe to dish the same dirt out on atheists as a group (a sort of selective "do unto others..." mentality on my behalf). And, even when I have a go at individual atheists because they are being pompous or otherwise annoying, I get comments from readers along the lines of "What is it with you and Richard Dawkins?" Which is a bit weird because I doubt that many liberals, a few years back, wrote to American leftist comedians and demanded to know what it was with them and George W. Bush.

I'm allowed to attack fundamentalists, of any religious persuasion, as everybody hates them, including God, Allah et al. But here is the big irony, although my liberal minded readers will defend to the bitter end the right of an atheist to say whatever they like about religious people, those same liberals can be incredibly thin skinned when a humourist from their own ranks makes fun of their pomposity or annoying traits. For example, I find the reaction I get from supposedly right on liberal Christians, when I take a pot shot at American ideals, so amazing and satisfying that I just keep having to do it over and over again.

Now that I am no longer a priest under the authority of the world's most scaredy cat liberal bishop, I am beginning to realise the freedom I now have to push the self imposed and peer imposed limits of good taste in Christian comedy. Such censorship has been imposed on Christians by white, middle class puritans and is a nasty, bastard child of the modern era. I look back to Chaucer and the anticlerical writers of the medieval period for my inspiration. Heck, I look back to Jesus who really took the piss out of the authorities and the pompous religious types of his day. I suggest that if any of you are so delicate that you really can't have any of your sacred cows prodded with a stick by an out of control mad priest (ex), you convert to Islam where you will be actively encouraged to blow to smithereens any body who writes something you don't agree with personally.

Christopher Hitchens writes in the latest issue of Vanity Fair about the cancer of the oesophagus that is afflicting him. He does so, as one might expect of him, with candour, intelligence and wit.

He also reveals in the article, Topic of Cancer, that the disease has spread to his lymph nodes, and that one tumour, located on his right clavicle, is large enough to be seen and felt.

"My father had died, and very swiftly, too, of cancer of the oesophagus. He was 79. I am 61. In whatever kind of a "race" life may be, I have very abruptly become a finalist."

Among the online comments, all from well-wishers, is one offering prayers for Hitchens's recovery.

I might well have called that ironic. But I see Hitchens is way ahead of me by observing: "Irony is my business and I just can't see any ironies here." 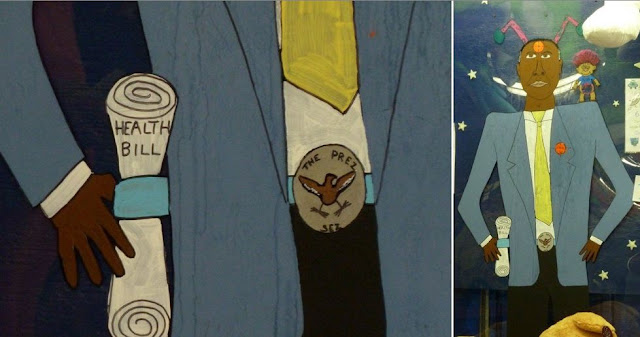 A game called "Alien Attack" at the Our Lady of Mount Carmel Big Time celebration in Roseto encouraged players to shoot darts at the head and heart of an image of a suited black man holding a health care bill and wearing a presidential seal.

“Yes, a woman talked to me about it,” Good said today. “She said she was offended by it. I said if you are, you might want to be. But you’re interpreting it as being Obama. We’re not interpreting it as Obama. The name of the game is ‘Alien Leader.’ If you’re offended, that’s fine, we duly note that.”

When it was suggested the health bill and presidential seal might lead players to believe the game did depict Obama, Good said, “You may be right there.”

Our Lady pastor the Rev. Jim Prior said he didn’t learn of the game until a parishioner complained after the carnival. He said he “most certainly would have put a stop to it” had he known sooner.

“We’re used to this kind of bigotry and prejudice, and we abhor it but it’s the way of the world,” Prior said. “Even the Divine Father himself is vilified in today’s culture.” 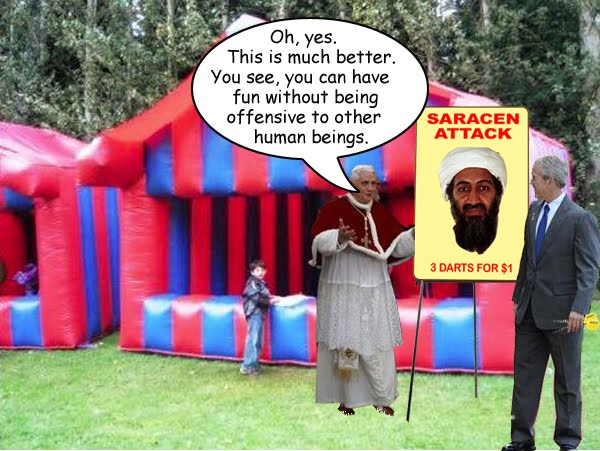 Thanks to Ellie for the link to the the dart throwing story.