A picture of 17 year old Tory Inglis and two gay men appeared in a front-page story June 12 in New Westminster’s Royal City Record newspaper promoting the local Gay Pride parade. About a month later, the minister at First Prebyterian Church, which she had attended all her life, called and asked to meet to discuss her involvement in the Pride event.

Tory said she met the minister and a female member of the church the next day, and she was told how she was promoting an improper lifestyle.

“Basically, they told me that I wasn’t being a positive role model for the youth in the church and the younger children, and that I was promoting a sexual lifestyle,” Tory told The Province Wednesday.

“I was so upset. I was crying during points of the meeting,” she said. “I’ve gone there ever since I was born. I was baptized there. So it’s really hard to hear from this place where I was pretty raised that I was now different.”

“I was one of the leaders of the junior youth group, and it’s not like every week I went up in front of the youth and said, ‘All right, let’s talk about how I’m gay this week.’”

The minister told her the church would prefer if she withdraw from the group that organized the pride events, Tory said, but she refused and withdrew her membership from the church instead. 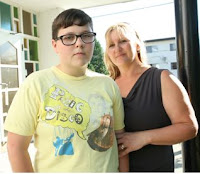 COMMENT: Meetings, like the one Tory had to endure with her minister, are nothing less than a form of sexual abuse, and in Tory's case the sexual abuse of a minor. Even the thought of those two self righteous Peeping Toms lewdly enquiring about the young lady's sex life makes me feel dirty - not in a nice way.

For choosing death not life, Tory's former
"pastor" is our Phobe Of The Day.

For choosing life not death, Tory is our...