When Steven Cohn, a Chicago-area lawyer, looked at photographs of Marc Mezvinsky, outfitted with a yarmulke and a prayer shawl, and Chelsea Clinton, luminous in a strapless gown and a 100-watt smile, he recalled his own interfaith marriage 30 years ago to Loreli Fritz-Cohn, a Methodist, on her grandmother’s farm in Ohio. He, too, wore a prayer shawl — though he recalled how hard it had been to find a Reform rabbi to perform the ceremony.

“They shouldn’t look at it as a loss,” he added, referring to statements made in the past week by Jewish organizations and their leaders. “Although there is that risk, there’s also the possibility of gain, which it has been for us.”

Nonetheless, the seemingly incandescent wedding of Ms. Clinton and Mr. Mezvinsky has churned up ambivalent reactions among the nation’s almost six million Jews. There is a clannish pride that after a history of exclusion and prejudice, the grandson of a Jewish Iowa grocer could marry into what passes for political royalty in the United States.

But some Jews fear that the societal openness confirmed by high-profile intermarriages like that of Ms. Clinton and Mr. Mezvinsky, or Caroline Kennedy and Edwin A. Schlossberg in 1986, prod more Jews to marry out of their faith. That, they worry, could threaten the vitality of a group that represents no more than 2 percent of the American population.

COMMENT: Oh, for goodness sake, go for it Jewish people. Not only will you find that it will help cleanse you of your own ancient bigotry and arrogance, you may find it will stop a lot of the vile prejudice against you.

In my opinion, Jewish isolationism is well up there with stupid "killing Jesus" accusations when it comes to reasons why Jewish people have been treated so abdominally over the last two thousand years. And that goes for all the other groups that try to preserve the purity of their bloodline and includes the current obsession of black people in the US that their children should only marry other black people. As a defence strategy it is wrongheaded and will only backfire on them in the long run.

These are the words of an aging, mad hippie. 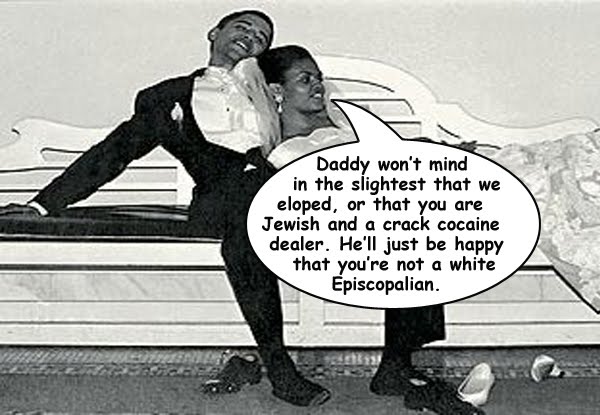