Council tenants will no longer have a "home for life" under a plan unveiled by David Cameron yesterday. The PM said fixed term contracts should be issued so that people can be evicted if they get a job or start earning more.


Eileen Short, of Defend Council Housing, said families and communities will be split up and ministers should be building more council houses to address the shortage instead of cutting funding. She said: "It is completely ill-conceived. Instead of creating communities it will create pockets of poverty and despair."


Mr Cameron already plans to slash housing benefit for poor families in private accommodation - in a move that will force thousands from their homes.

COMMENT: I love Americans but, boy, do I hate America. It sits their in its doomsday bomb protected smugness, one huge excuse for every tin pot, tory, wannabe Thatcher to screw the poor and working classes of their own countries. 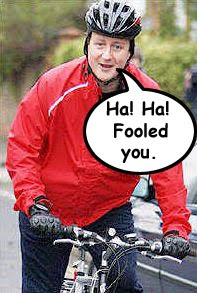 I suppose it is inevitable that we will all become American one day. Unfortunately this terrible prospect is being thrust upon us far quicker than it should because it seems the first thing the English people chose to ape is the American working class's lemming like insistence on voting into power posh boys who they know full well are just going to make their lives even more miserable.