The archbishop told The Australian he had not meant to imply people should not vote for the Prime Minister - a self-professed atheist - and was simply "sounding a caution" about the rise of secularism in politics.

"I had no intention of attacking Julia Gillard at all. My point was the future, not the present - that if the people who don't subscribe to any religion get stronger, we might have a repeat of what happened in Europe, where the church was sidelined," he is quoted as saying.

COMMENT: And back in Britain, people are still completely baffled as to why the upcoming visit by the pope is not being seen as the good thing the Roman Catholic hierarchy keeps telling us it is. The Vatican is even hinting that the UK media is actually trying to influence public opinion. That people with power and a captive audience should do such a thing is disgusting. 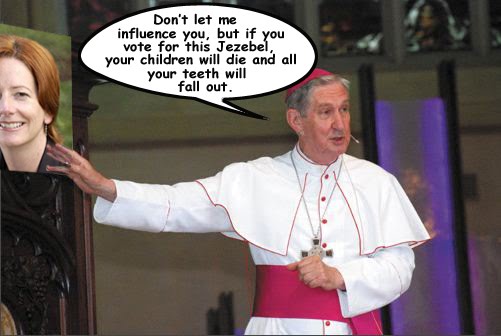