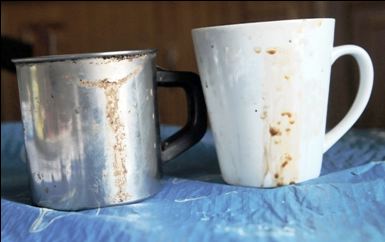 A 48-year-old man, who asked not to be named or photographed, says that he found an image of Jesus on the cross on his favourite steel cup a year ago. And now, a year later to the day, Jesus' image has appeared on a second mug after he drank a cup of coffee.

On the evening before the first sighting, the man says he had just finished watching a religious documentary on TV and had given an ultimatum to God while sipping tea from his favourite mug.

"I had switched the television off and I said: 'Give me a sign, show me something, I know I am arrogant.' Then I said: 'Talk to me, show me' and then I went to sleep."

The next morning, the man says he woke up and noticed the strange image as he went to wash his mug.

On a second occasion this year, the man says Jesus' face appeared on a white coffee mug.

Now the man says he is desperately searching for answers from all religious sectors and experts.
"I know I have a soul which I cherish and I know I must be careful of what I say. I plead with anyone to examine the mugs and explain how the pictures were formed," he says.

Father Mike Williams, an Anglican Catholic Priest in Lansdowne, has come out to support the man's claims.

"He brought me the mug and it was a picture I have been seeing since I was a little boy," he says.

Father Mike says he has no doubt God chose the man for a reason.

"I personally find that he [the man] is neither mentally deranged nor spiritually impaired."
The man says the images have changed him from a non-believer into someone moving closer to God every day," stated the clergyman.

The man who found the two images says, "I am not a Christian, and I've never read the Bible. But I have started moving closer to God every day."

COMMENT: OCICBW... never disses visions unless money is made from them (so that's Lourdes out of the running).