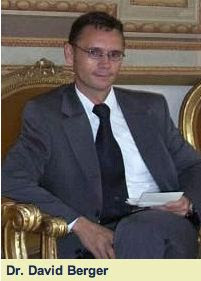 David Berger, 42, a grammar school teacher and expert on the influential medieval philosopher Thomas Aquinas, told the daily Frankfurter Rundschau in April that he was a homosexual. Now, the same paper has reported that the academy head, who is a member of the ultra-conservative Church group Opus Dei, has banned him from teaching at the academy.

Berger’s position on “a point of Church teaching” made it impossible for him to continue, academy president Lluis Clavell wrote in a letter of dismissal. Clavell wrote that he had learnt of Berger’s admission with “deep pain” and dismay.

When Berger came out in April, he accused the Catholic Church of having a “hypocritical, bigoted” position on homosexuality, and complained of a “growth in the homophobic tendencies within Catholicism.”

COMMENT: Ultra-conservative?
I think the phrase "bleeding fascist" would be more exact in this instance.

Thank God for the Swedes...

Transgender people need more protection, the Liberal Party has announced, adding it proposes that the hate crime law be clarified so that it is clear that it also applies to this group,

"It is always important that the law be as specific as possible," Integration and Gender Equality Minister Nyamko Sabuni told Ekot. "It is also important to note that there is a group in our society who are neither bi- nor homosexual, but have a different gender identity than the one we believe that they have."

"We fear that transgender people fall through the cracks because the individual courts are not as familiar with the law's preparatory work and miss that the section on hate crimes can be used for transgender people," said RFSL chairwoman Ulrika Westerlund.