Madam, – Thank you for publishing Mary Condren’s excellent article “Latest Vatican document is final straw for women” (Opinion, July 26th). Sad to say, the same illogical attitudes still prevail among the traditionalists of the Church of England, although they were voted down in the recent debate on women bishops at the General Synod in York earlier this month.

On reading the Synod reports it struck me that the demand for “sacramental assurance” – the guarantee that the priest celebrating the Eucharist has not been ordained by a woman bishop, or even by a bishop originally ordained by a woman – is a demonstration of “magical thinking” at its most primitive, akin to ritual rain-making ceremonies and tribal rituals designed to control the uncontrollable.

While many of us occasionally indulge in magical thinking in small ways, if applied to serious issues it can become a major cause of injustice and handicap to general well-being.

As I understand it, magical thinking relies on perceived (but un-confirmable) causal links between desired events and the phenomena that appear normally to accompany or precede them. It assumes that, by ensuring that there is no change in the supposed link of cause and effect, we can ensure the desired result every time – in effect, we imagine we can control the action of God.

Perhaps this is what accounts for the popularity of St Vincent of Lerins’ questionable definition of Catholic faith “q uod ubique, quod semper, quod ab omnibus creditum es t” (what has been believed everywhere, always, by all people).

An obvious example of this way of “thinking” is the conviction that no woman can effectively celebrate the Eucharist, because to change the pattern of the celebrant having always been a man in days gone by is to change a significant variable of the mystery of the sacrament – which will mean that the “magic” won’t happen.

All we will have is what Cardinal Connell once notoriously called “a sham”!

Those who fall prey to this style of magical thinking in the 21st century may deserve our sympathy and even a degree of respect, given that a high level of anxiety and desire for control, of which they may not be aware, is probably at the root of the matter.

But no thinking person, however devout, should allow themselves to be persuaded that God limits his blessing, whether sacramental or not, to channels specifically opened up by a designated male. 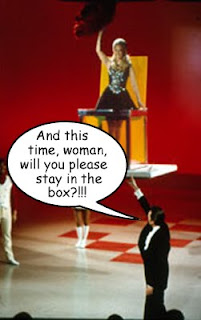 COMMENT: Oh, don't you just love it when really clever people put the boot in?

Canon Kennerley goes into more detail concerning "magical thinking" and the sacraments in a sermon she preached on 25th. July 2010. It is posted, in its entirety, on the CHRIST CHURCH CATHEDRAL, DUBLIN, website.