From the article "Why are the media so utterly hostile to the pope?" posted by THE CATHOLIC HERALD:

The sneering vitriol heaped upon the Holy Father and on Catholics in general by the English metropolitan elites in advance of the papal visit to Britain in September has been little short of staggering. We are well acquainted with the apparent incompetence that has characterised the organisation of the trip, but that doesn’t explain why so many in the press seem to be baying for the Pope’s blood.

Back in March, the Independent's eccentric columnist, Johann Hari, succeeded in convincing those already eager to believe that Pope Benedict XVI was personally culpable for covering up child abuse that “there must be something in it”. His piece was laced with distortions and misrepresentations. He wrote: “It is now an indisputable fact that the Catholic Church systematically covered up the rape of children across the globe, and knowingly, consciously put paedophiles in charge of more kids. Joseph Ratzinger – who claims to be “infallible” – was at the heart of this policy for decades.”

What many have suspected as a pernicious anti-Catholic bias at the Times was apparently confirmed when columnist Caitlin Moran tweeted that the Catholic Church “hate[s] women and fucks kids” to her 29,000 followers.

The BBC is planning a drama called The Pope on Trial, “a 90-minute drama which will take as its premise what would happen if the Pope were to go on trial for covering up sex abuse perpetrated by priests”.

And there are hints, most notably in Damian Thompson's latest piece for The Spectator, that the British media are storing up something particularly juicy to deploy as Pope Benedict XVI’s plane lands.

All of which begs the question: why?

COMMENT: Answers on a postcard to "The Catholic Herald," please. There's no point in trying to contact them via their web page. Their account has been suspended for some reason.

My goodness! Even the Internet is out to get him. 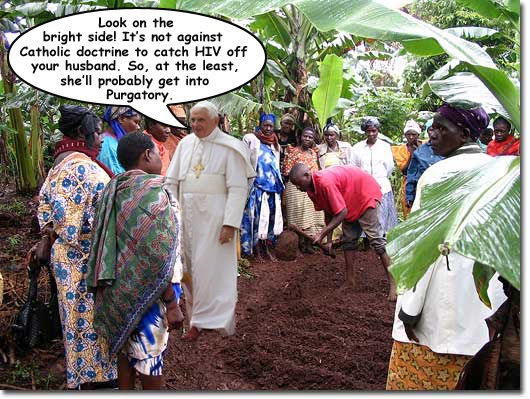