Michelangelo concealed an image of the human brainstem in a panel showing God at the beginning of Creation, according to an article in the May issue of Neurosurgery, the official journal of the Congress of Neurological Surgeons.

Medical illustrator Ian Suk and neurosurgeon Rafael Tamargo, of The Johns Hopkins School of Medicine, Baltimore, state "We propose that Michelangelo, a deeply religious man and an accomplished anatomist, intended to enhance the meaning of this iconographically critical panel and possibly document his anatomic accomplishments by concealing this sophisticated neuroanatomic rendering within the image of God. We speculate that during his numerous dissections, Michelangelo possibly dissected the brain and spinal cord and that over the years he probably acquired a sophisticated understanding of gross neuroanatomy.

The "concealed neuroanatomy" is found in Michelangelo's painting of the Separation of Light from Darkness, one of a series of nine Sistine Chapel panels showing scenes from the Book of Genesis.

Suk and Tamargo aren't the first to suggest that Michelangelo included images of the brain in his Sistine Chapel frescoes. A previous researcher found an outline of the brain embedded in the famous panel depicting the Creation of Adam.

COMMENT: I won't believe a word of it unless it gets a thumbs-up from the Temperance Brennan, of the OCICBW... community, NancyP. 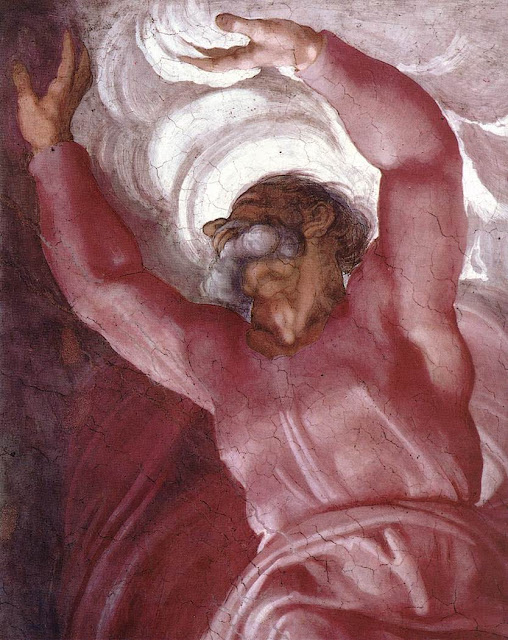