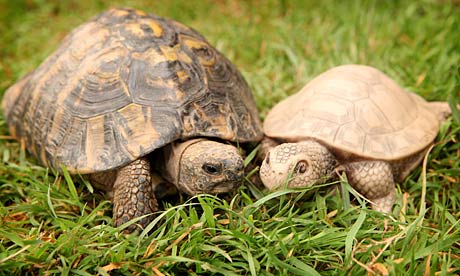 It is an unusual romance, to say the least. He is made of flesh, blood and shell while she is constructed entirely out of plastic. But after years of heartache, Timmy the tortoise seems to have found some sort of comfort by teaming up with Tanya the plastic toy tortoise. Timmy, a Hermann's tortoise (Testudo hermanni), appears to dote on Tanya night and day.

The sanctuary's owner, Joy Bloor, said: "I tried introducing him to other tortoises but they don't seem to like him and bully and fight with him. I put the plastic toy in his pen with him and now they are inseparable. He nuzzles and kisses her, moves her around and pushes lettuce towards her. He plays with her every day. If I want him to go into his hut at night time I have to put Tanya in there first, otherwise he won't go.

COMMENT: I believe you can get a similar sort of thing for human males. If you decide to purchase one please use Amazon, as I will then get commission.

Thanks to THE Soppy Sheila for sending
this story in to MadPriest Towers.