Archbishop of Naples Cardinal Crescenzio Sepe, who was previously the Vatican official responsible for foreign missions, is under investigation for corruption along with an Italian ex-government minister. He is accused of colluding with Pietro Lunardi, a former transport minister, to offer cut-price property deals.

Until 2006, he was Prefect of the Congregation for the Evangelisation of Peoples. In that position he enjoyed access to the department's enviable portfolio of cash and property assets. 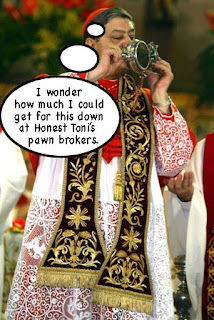 He is being investigated alongside Mr Lunardi under the scope of an magistrates' investigation into a major corruption scandal involving prominent politicians.The pair are alleged to have colluded over a property deal that saw Mr Lunardi buy a building in Rome from Cardinal Sepe's department in 2004. The Vatican said in a statement that it hoped the situation "could be cleared up fully and rapidly in order to eliminate any shadows, be they on the person [Sepe] or Church institutions".