A North Yorkshire school is ordering all its girls to wear trousers after claiming that the length of some pupils' skirts is "inappropriate". St Aidan's Church of England School in Harrogate said children were "clearly wholly unaware of the signals they are giving out" by wearing short skirts.

In a letter to parents, head teacher Dennis Richards said all students must wear trousers from September.

Mr Richards said: "Parents who come in have been astonished to see the difference between the length their daughter may wear her skirt as she leaves home and what has happened by the time she is walking the corridors of the school."

He said the school had been "seriously concerned now, for a number of years, that girls as young as 12 or 13 years of age are placing themselves at risk by wearing skirts of a wholly inappropriate length".

Mr Richards said he had received supportive messages from parents who were "grateful to us for taking a difficult decision on their behalf".

But parent, Jo Bagley, said: "On the one hand you have got society wanting women to be able to dress as women... but on the other hand here you have a school saying they can't wear skirts.

"It seems outrageous that they shouldn't be given the choice."

COMMENT: If the pupils truly are "clearly wholly unaware of the signals they are giving out" then girls have changed a heck of a lot since I was at school. 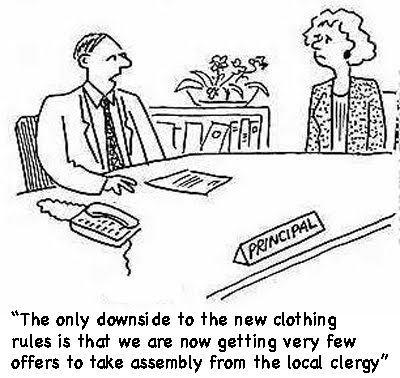