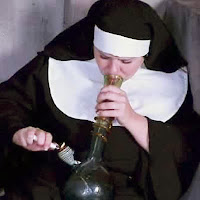 Uganda police are investigating after a marijuana plantation was uncovered in the garden of a convent. A regional police chief told the BBC that plants covering one acre had been found and uprooted in the southern Masaka district.

Two nuns and two porters have been questioned.

One of the nuns has been quoted by local media as saying the marijuana was used to treat farm animals, such as pigs.

Thanks to Laura for sending this story in.