The Sun newspaper is the unabashed gut of England's gutter press. It is the home of the infamous page 3 topless model and delights in publishing such enlightened articles as "10 Ways To Spot If Your Vicar Is A Pooftah." It is, of course, the butt of countless jokes based mainly on the claim that the phrase "Sun reader" is an oxymoron.

It regularly runs readers' polls, usually along the lines of should paedophiles be hung, drawn and quartered, although I don't know why they bother - the result is normally a resounding "hanging is too good for them."

I have to say "normally" because sometimes the unexpected does happen. A week ago, following the resignation of a cabinet minister because of an alleged expenses fiddle involving the rent on his male partner's apartment, they asked the question, "Should gay people be cabinet ministers?"

This was the result of the poll: 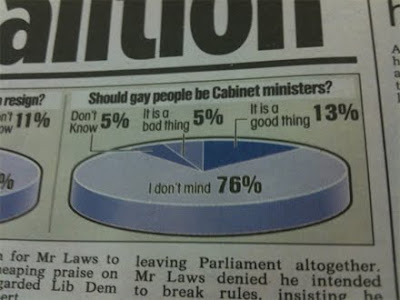 Just 5% of Sun readers (oxymoron?) believe that being gay should be an impairment to holding high office in Britain. That, in my opinion, is a wonderful eye-opener and overwhelming proof that, for the vast majority of the working class people of my country, there really isn't a "gay question" anymore. The logic employed by Sun readers isn't what you would call complex, and so I think it can be assumed that pretty much any question regarding the equality of gay people in England would be answered with the same "it doesn't bother me" response. For your ordinary Brit (excluding Northern Ireland), gayness has become ordinary.

It does, of course, throw up a huge question. Why is the leader of the so-called Church of England so out of step with the people of England? Why does he appear to take more notice of the beliefs of the readers of the New Vision newspaper of Uganda than the readers of the Sun newspaper of England? Does the spiritual head of England's national church really believe that 95% of the working class people he has a duty of care for, are going to hell in a handcart because they have worked out that love is love wherever it is found?

This is weird. In the USA it is difficult to persuade 50% of the adult population to vote in favour of measures that would give more equality to gay people, and the appointment of gay officials, teachers and the like, still elicits substantial, vocal and downright nasty opposition. Yet US churches are steadily, and more and more rapidly, embracing the concept that same sex relationships are not, automatically, sinful. In fact, the churches are among the leaders in the campaign for gay equality in the States. But in England, the Church of England, is still aggressively attached to an illogical moral position that has been decisively deemed ridiculous by even the most conservative (with a small "c") UK (excluding Northern Ireland) citizens.

Rowan Williams has become the man trapped on the roof of his house refusing to be rescued from the flood because he is waiting for God to rescue him. But in Williams' case, he is the man who refuses to listen to the voices of virtually every one in his country because he is waiting to hear the voice of the Holy Spirit. I am sure you can work out the punchline for yourselves.