It has taken him more than a decade, but Italian-Israeli archeologist Prof. Emmanuel Anati now believes his controversial view that the biblical Mount Sinai is in Israel’s Negev desert rather than Egypt’s Sinai Peninsula will soon be adopted by the Vatican.

On Friday, he presented his theory in the form of a new book at a seminar at the Theological Seminary in the northeastern Italian city of Vicenza.

“Actually it’s not a theory, it’s a reality. I’m sure of it, Anati told The Jerusalem Post by telephone from his home in Capo di Ponte. “My archeological discoveries at Har Karkom over many years and my close reading of the Bible leave me with no doubt that it is the real Mount Sinai. I’m now sure that Karkom is the real mountain of God.”

In 2001, Anati published the English edition of a book that was first issued in Italian two years earlier and titled The Riddle of Mount Sinai – Archaeological Discoveries at Har Karkom. In the book, he postulated that Karkom, 25 km. from the Ramon Crater, was probably the peak at which Moses received the Ten Commandments – and not the summit in southern Sinai where Santa Catarina (Saint Catherine’s Monastery) stands.

“I know this is revolutionary,” he conceded. “I’m not only changing the location, but I’m moving Mount Sinai to Israel, and I’m sure it will anger the Egyptians. But Israel should be proud of this. The Negev is empty and should be developed.”

“I’m also changing the date of the Exodus from Egypt to some 1,000 years earlier than previously thought,” he added. “I know this will drive everyone crazy. But I am right. I’m sure of it.”

Every archeologist in the world, worthy of the title "archeologist," including, I am 100% certain, Mr Harrison Ford himself, accepts that the Mount Sinai, mentioned in the Bible, was, in fact, the hill now known as Scafell Pike in the English Lake District. And I have this photograph to prove it. 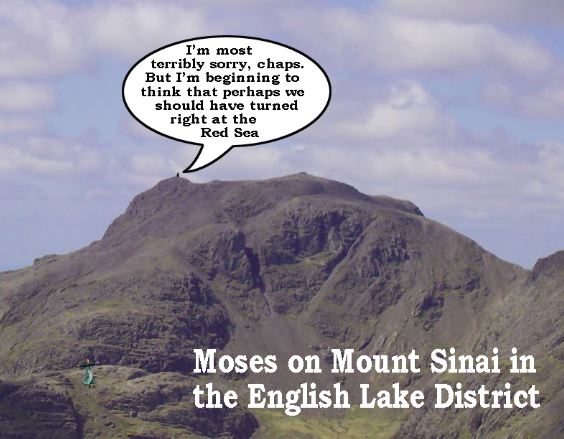