Rivers State Governor, Hon. Chibuike Rotimi Amaechi, says the recent ordination of a gay Bishop in the Anglican Church in the United States of America is the height of moral decadence in the Church in particular and the world in general. Governor Amaechi said this when the new Primate of the Church of Nigeria, Most Reverend Nicholas Okoh, led a delegation to visit him in Government House, Port Harcourt.

Represented by his deputy, Engr. Tele Ikuru, Governor Amaechi condemned the act, regretting the continued trend of moral laxity of people of this generation in spite of the proliferation of churches in the world.

Commending the new Primate for his elevation, the state chief executive urged him to face the challenge of redeeming the battered image of the Church frontally, saying " Primate, you have a lot in your hands; the times are not good and challenges are daunting," urging him to restore the virtues that made the Church a sacred institution.

He said, "It takes the will and grace of God for anybody to be lifted," calling on the church to collaborate with government in building a virile society, describing the Church as "the soul of the people." 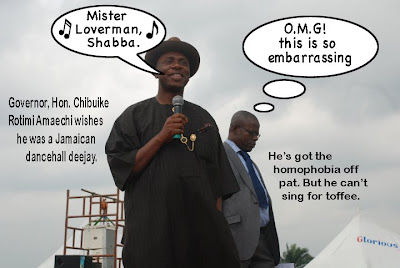