The Primate, Church of Nigeria (Anglican Communion), Most Rev. Nicholas Okoh, last Thursday called on Nigeria to quit the UN, over the latter’s support for homosexuality.

Okoh said that it was regrettable that the UN was currently using human rights bodies and non-governmental organisations to ensure the entrenchment of homosexuality globally. The cleric made the call in Lagos at a reception held for him by the Ecclesiastical Province of Lagos at the Cathedral Church of Christ, Marina, Lagos.

“If the UN has made itself an agent for the propagation of homosexuality globally, then it is time for us (Nigeria) to pull out of the organisation.

“This is because the UN has no right to determine for or impose moral standards on us (Nigeria). Let us stand firm and refuse to be bought over by the West,’’ he said.

Okoh promised to continue the fight against homosexuality and urge the Anglican Church to support him.

The primate reminded adherents that God had put them in this part of the world in an age where the world was continuing its rebellion against God.

He warned that the world’s rebellion against God, which started in the Garden of Eden, would culminate in the appearance of the anti-Christ and the eventual end of this age. 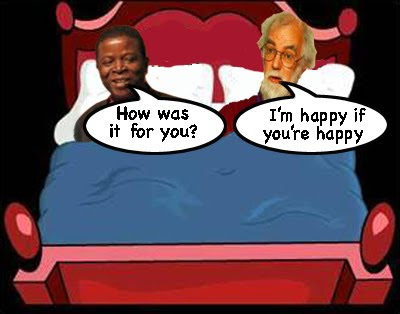