Swedish feminists and the Lutheran church have become unlikely allies in an attempt to prevent a princess having the wedding of her dreams. The Church of Sweden and the Swedish royal family have clashed over Crown Princess Victoria’s wish to be “given away” by her father, King Carl Gustaf, at her marriage to her former personal trainer, Daniel Westling, in Stockholm next month before a guest list studded with the kings, queens, princes and princesses of Europe’s remaining royal houses.

Sweden is one of the most equality-conscious countries on earth, and the official church has long disapproved of the symbolism of brides “ being given away”, regarding the practice – as does most of the populace – as an outdated and sexist tradition.

So when Princess Victoria let it be known earlier this week that she was breaking with Swedish tradition – the bride and groom walking down the aisle together – and wished to have her father at her side to “give her away”, the head of the Swedish church, Archbishop Anders Wejryd, soon voiced his disapproval in public.

“Being given away,” he declared, “is a new phenomenon which occasionally occurs in the Church of Sweden. I usually advise against it, as our marriage ceremony is so clear on the subject of the spouses’ equality.”

Priest and theologian Annika Borg described the practice of being given away as “unSwedish and a import from American films and TV series”. “I think it is a pity that Sweden’s future head of state has chosen to follow a practice that is not Swedish tradition,” she added.

COMMENT: Things have changed so much since I was kid. Back then you could the king to give away half of his kingdom half as well as his daughter's hand in marriage. But, on the other hand, back in the day a handsome prince had to do something that involved a lot more spilt dragon's blood than being a P.E. teacher entails. I blame the big bad wolf. 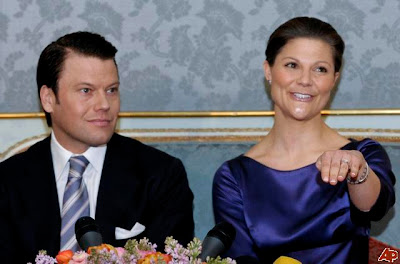