The Church of Scotland has condemned the imprisonment of two gay men in Malawi as "unjust". Rev Ian Galloway, convener of the Kirk's influential Church and Society Council, which sets down its policy on social issues, spoke out against the jailing of the two men to 14 years' hard labour after they became engaged in December.

He said: "It is not right to imprison people on the grounds of their sexuality, even in a place where attitudes to human sexuality are different from here, and those differences should not stop us saying so."

From THE OBSERVER editorial:

Homosexuality is not a sin or a crime. There is no caveat or quibble that should be added. The repression of gay men and women by legal means and public intimidation is an offence against the basic principles of a free and just society. Where it exists, which it does to varying degrees in many countries around the world, it must be confronted and defeated.

The case last week of two gay men sentenced to 14 years' hard labour in Malawi is a stark reminder of how urgent the task is.

In five countries around the world – Iran, Mauritania, Saudi Arabia, Sudan and Yemen – the death penalty can be applied to gays and lesbians. They can be prosecuted for the fact of their sexual orientation in 76 countries, 38 of them in Africa.

There are also countless jurisdictions where homophobic attacks are tolerated by police. Britain hardly has an impeccable record on that front. But the UK has undergone a cultural revolution with regard to gay rights in the last decade: the repeal of Section 28, which banned teaching about homosexuality in schools; an equalised age of consent; civil partnerships and the prohibition of discrimination on grounds of sexual orientation.

Britain is also not without influence in countries where persecution is institutionalised. A particular obligation falls on the Anglican church, which counts in its communion clergymen who preach venom and hatred. The Anglican bishop of Uyo in Nigeria, Isaac Orama, has described homosexuals as "inhuman, insane, satanic and not fit to live".

The Anglican hierarchy in Britain has avoided speaking out too frankly on this matter to avoid a schism, but the church's quiet diplomacy has done nothing to help the victims of homophobic repression. Increasingly, it looks like complicity. 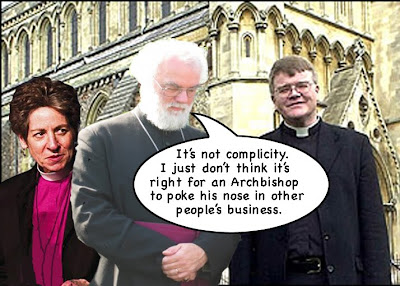