Not only the Archbishop of Canterbury, of course. But every so-called moral authority whose forked tongue pronouncements, policies of appeasement and dualistic beliefs have allowed and encouraged the evil, but, far less disingenuous, haters of our world to believe they can get away with obscenities such as this.

It is time (long passed the time in my opinion) for all Gospel based Christians to let go of their deeply ingrained propensity to always see two sides to every story and their wishful belief that there can be a third way in every dispute, and to get real. As Jim Naughton stated in his article for THE LEAD on Monday: 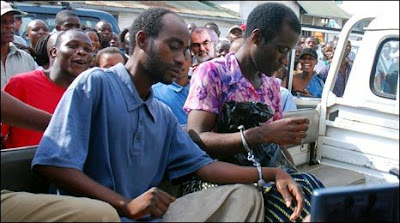 A judge in Malawi has sentenced a gay couple to 14 years in prison with hard labour after they were convicted of gross indecency and unnatural acts. He said he wanted to "protect" the public.

Steven Monjeza, 26, and Tiwonge Chimbalanga, 20, have been in jail since their arrest in December 2009 after holding an engagement ceremony.

"I will give you a scaring sentence so that the public be protected from people like you, so that we are not tempted to emulate this horrendous example," said Judge Nyakwawa Usiwa-Usiwa in the commercial capital, Blantyre.

She described the pair as "prisoners of conscience" and said Amnesty would continue to campaign for them to be freed.

COMMENT: Amnesty International's Christlike commitment to free the oppressed shames the churches of the world. They are part of the solution. Thanks to prevaricators such as Rowan Williams, we are well and truly part of the problem.