This was unexpected. It's a real shot on goal that came out of nowhere.

Every four years they put on this football tourney called The World Cup. Every four years the English get slightly excited by this, to the extent that you actually see the odd flag of St. George flying (very unusual in England as it would normally get you arrested for being racist). Every four years a smattering of truly awful records are released celebrating the event and claiming, quite unrealistically, of course, that England is going to win it. Usually these songs are of the quality of "World Cup Willie" or "Back Home." Very, very occasionally someone actually releases a record that you don't switch the radio off half a bar into it (a good example of such a record would be "Three Lions" by the Lightning Seeds et al. But that was recorded for the European Championship not the World Cup).

This time round, due to the easiness of recording a record and getting it on the internet, there are even more crappy football songs around than usual. However, I have discovered something that has just never happened before - not ever. Someone has gone and released a whole album full of the stuff that is a work of bloody genius. 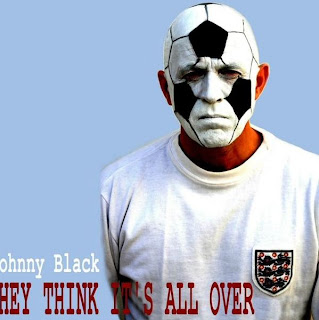 I nearly fell off my chair, guv'nor.

Unfortunately, if you're not English, you will probably not get the musical and lyrical references and, therefore, not see it as the towering, innovative work of art that it truly is.

But English football fans will get it. It's a shame it's such an obscure release because it really does merit widespread fame and adulation and an OBE for Mr Black thrown in as well.

It doesn't appear to have been released on CD. But you can download it from the UK and the US Amazon sites.