The New Scientist has announced this week that researchers working on the Neanderthal genome are confident that they did do the wild thing with homo sapiens. They think between one and four percent of our DNA derives from these liaisons. Of course, this only applies to those humans descended from the out of Africa pioneers. Those descended from the humans who remained in Africa do not have any Neanderthal DNA.

Perhaps it is time to reevaluate the intelligence of the much maligned Neanderthal species.

If you are looking for saints, avoid the Anglican Church in Zimbabwe. On one side stands a collection of bible-waving gay activists, who are ranged against police-backed pseudo-religious gangsters who count Robert Mugabe among their heroes.

Bishop Nolbert Kunonga, an unpalatable man by all accounts, formed a break-away church in 2007 after resisting pressure to join other Anglicans, particularly the Church of England, in blessing, or at the very least supporting, gay marriages. After his election as bishop in 2001, Kunonga denounced his fellow priests who refused to buy into his gospel that Mugabe was a democrat. He called them “Uncle Toms” and “puppets”. All 25 white priests from around the country have now quit his diocese. There were allegations raised by the church that he ordered the killing of 11 fellow priests. One priest, James Mukunga, was forced to flee to London after claiming Kunonga had given him a list of top Anglican officials, his opponents, to pass onto government hitmen. The more you hear about Kunonga, once an African liberation theology professor in the United States, the more you move closer to the conclusion that he is the anti-Christ.

As the church sought to draw a line under the Kunonga saga, it named Bishop Chad Gandiya as his replacement a year ago. Gandiya is a gay-supporting bishop – which makes him a polarising figure in a church riven by all manner of strife, not least by the gay issue. He was, of course, chosen in London where the gayrisation of the Anglican Church is being organised.

The Church of England accepts gay marriages and even has gay bishops. But the situation is different in Africa, where the majority body of opinion detests the lifestyle. What more, homosexuality is illegal in Zimbabwe – placing Gandiya in a rather precarious situation.

What becomes clear in the whole affair is that the Anglican Church in Zimbabwe has been seriously damaged by external interference, especially on the gay issue, and by the Church of England in particular which replaced one politically-clumsy bishop with another whose moral judgment is questionable. 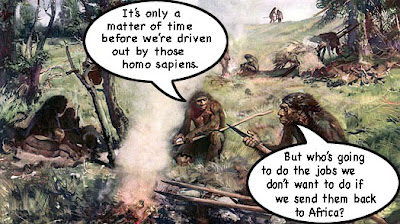