There's been a lot of whinging around the Neighbourhood, especially from certain Southern States Americans, about British Petroleum and the minor oil spillage in some godforsaken part of the world that's only fit for Mexicans and people who speak French anyway. Personally, I can't see what all the fuss is about because I doubt if it affects my life in the slightest. Also, I don't 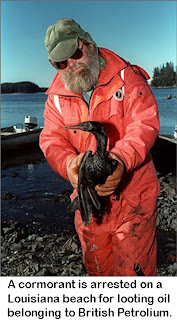 think the people who are complaining realise the lengths the people who run companies like BP go to so that they can make sure accidents like this accident that has just happened never happen. Hopefully, this video will explain everything and you can all stop going on and on about it. And another thing, you Americans make such a lot of fuss about the price of gas and then when a few million gallons of the stuff washes up on your shores, that's sitting there ready for you to just pick up for absolutely no cost whatsoever, you make a fuss about that as well. Go figure!