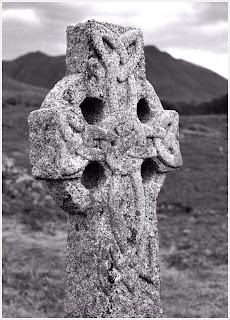 BATBA (the British Association for Tediously Boring Atheists) has won it's legal action to have all the ancient crosses on non-church land in Scotland torn down. Three high court judges yesterday agreed that the presence of such religious relics on the moorlands and hills of Scotland was a deliberate insult perpetrated by ancient Celts against Muslims and enlightened university professors with lucrative publishing contracts.

The spokesman for the Scottish branch of BATBA, Professor Dicky McDorkins, told OCICBW... that the Scottish crosses were responsible for all the wars that had ever taken place in the entire world, the sex abuse scandals in the Roman catholic Church and his wife never getting another decent acting role after being kicked off "Doctor Who."

"Imagine being on a ramble up a Scottish hillside and suddenly coming across one of these relics of religionist propaganda," he said. "I've heard of perfectly normal people stumbling upon these crosses unaware and deciding on the spot that the world was created in six days by an invisible friend." (In Britain, denying Darwin's theory of evolution is illegal and is punishable by laws similar to German Holocaust denial legislation).

Bishop David Chillingout, chief stove and leader of Scotland's nineteen episcopalians told OCICBW... that although he fully understood that some people might find these weathered pieces of stone frightening and controversial, he was still going to punch Mr McDorkins in the nose next time he bumped into him down the lodge.

When we contacted them, the Ramblers Association refused to comment.

A seven-foot-tall Latin cross in the middle of both the Mojave Desert and a Supreme Court case on the separation of church and state has been stolen, federal officials said Tuesday. The cross, made of metal tubing reinforced with concrete and bolted to a base on a rock, about 200 miles east of here, was discovered missing Monday.

A large plywood box had covered the top of the cross for several years, making it look like a big wooden lollipop, while a lawsuit over whether a religious symbol could stand on public land made its way through the courts.

The cross was erected on Sunrise Rock by private citizens in 1934 to honor World War I dead. It has been replaced and repaired over the years, but since the reinforced metal one went up in the mid-1990s it had never been removed, Ms. Slater said. The box, however, placed over the cross in 2001, has been repeatedly vandalized, she said.

The theft comes 10 days after a divided Supreme Court made a ruling in the case that let the cross remain while a lower court continued the legal wrangling. A former Park Service employee had sued to remove the cross on the ground that its presence in a federal preserve violated the separation of church and state provisions of the Constitution. 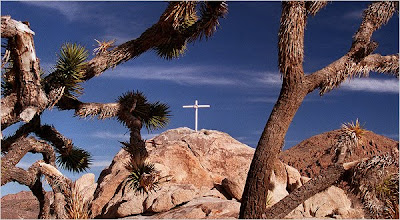