From THE SUNDAY GAZETTE-MAIL: 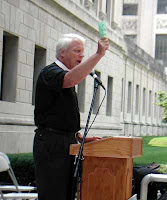 The Rev. Jim Lewis, an activist against the Iraq war and longtime leader of other public causes, has been stripped of his license by the state's Episcopal bishop on grounds that he performed too many rites for his former parishioners at St. John's Church in Charleston. However, he says, nearly nine years have elapsed since he returned to Charleston in retirement, and his involvement with long-ago church members never caused a problem until now.

Lewis has a high profile in West Virginia. During the stormy 1974 fundamentalist uprising against "godless textbooks," he led a defense of the school system and the disputed books. He also created Manna Meal, a humanitarian soup kitchen at St. John's for homeless or impoverished people. And he helped establish Covenant House, a shelter for the down-and-out, originally in a small house behind St. John's. He blessed unions between gay couples and opposed the death penalty. He pushed for what became the Women's Health Center. In 1982, Lewis moved to Michigan, but returned in 1985 to head Charleston's Coalition for the Homeless. Then he went into religious social work in North Carolina and Delaware. He championed impoverished poultry workers in the Delmarva Peninsula.

Lewis and his wife, Judy, retired and returned to Charleston on Sept. 11, 2001. Soon after the suicide terrorist attack of that date, he organized West Virginia's Patriots for Peace to oppose President Bush's invasion of Iraq. Three years ago, he led a sit-in at the Charleston office of Rep. Shelley Moore Capito to protest her support for the Iraq war. He was sentenced to a day of public service and chose to work on a Charleston trash truck. In 2008, Lewis recruited an interdenominational group of West Virginia ministers to support Barack Obama for president.

Since his retirement, Lewis has served as part-time priest of various West Virginia Episcopal congregations. He was interim minister of St. James Church in North Charleston for a year. Then he filled the same role for nearly two years at St. Luke's Church in Edgewood, helping to merge St. Luke's, St. James, All Saints in South Charleston and Good Shepherd in Kanawha City into a consolidated St. Christopher Church.

His Episcopal work halted abruptly on Feb. 22 when Bishop Michie Klusmeyer issued a letter revoking Lewis's license under a church policy that says: "Clergy who have formerly had a pastoral relationship with a parish will not continue to minister in the former parish in any way."

The bishop told Lewis that some "parishioners have requested that you visit them, and some have even asked that you preside at their funerals." He concluded: "I find that you have been unable or unwilling to maintain appropriate boundaries with former parishioners."

Lewis informed the St. John's vestry that his involvements with past members posed no problem for about eight years, while the Rev. Karl Ruttan was rector of the congregation.

The state Episcopal diocese office reported that Bishop Klusmeyer is out of town and unavailable to answer questions about this topic.

COMMENT: I'm not 100% certain but I don't think we have this particular law in the Church of England. I think we tend to rely on etiquette and good manners. I just assume that members of my congregation will have priests from their past who they are particularly close to and that they will go to them for spiritual advice. That they would want that priest to conduct their funeral is just human nature and rather beautiful, if you ask me.

However, in England, good manners dictate that if a priest is approached to conduct a funeral, or other rite, in a parish in the care of another priest, the permission of the incumbent should be sought first. Good manners also dictates that the incumbent will agree to the request.

I know many incumbents have problems accepting another priest being popular within their parish, but personally, being a lazy sod, I always jump at the chance of extra help and try and build up good relationships with retired clergy and non-parish priests in my parish. The only situations in which I would get extremely cross is if such a priest started consistently and deliberately contradicting my teaching, if they organised hate campaigns against me or tried to set up an alternative congregation.

To be honest, I think it is inhumane and unchristian to dictate where a retired priest can live and minister. A retired minister, who used to work at your church, living in your parish may be problematic. But it is the sort of problem that should be sorted out through discussion, hopefully to the benefit of all concerned. If, after such discussions, the retired priest refuses to be good mannered or works against the parish priest then his or her license should be revoked for not respecting the bishop's authority, not for the fact that they are living in their former parish.

I expect there is more to this story than is being reported in the above article. If anyone has any more details please let us know. 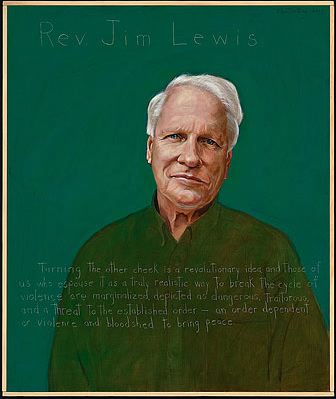