Monsignor Dadeus Grings, the archbishop of the southern Brazilian city of Porto Alegre, told a Brazilian bishops' annual conference he believed paedophilia was on its way to becoming as accepted as homosexuality in society at large.

"Society today is paedophile, that is the problem. So people easily fall into it. The fact it is being denounced is a positive sign," he told the gathering on Tuesday.

Archbishop Grings, a 73-year-old priest with conservative views, said the gradual acceptance of homosexuality by the public was a precursor to a possible broad acceptance of paedophilia.

"When sexuality is banalised it is clear that that can have an effect on all cases. Homosexuality is one case. Before, no one spoke of the homosexual. He was discriminated against," he said.

"When we start to say that they [homosexuals] have rights, rights to publicly demonstrate, in a short time paedophilia will also have rights."

Archbishop Grings stressed that he condemned the sexual abuse alleged to have been perpetrated by priests against children, saying they were crimes that must be punished.

But he also said the church had difficulty in denouncing such cases.

"For the church to accuse its own, that is a little strange," he said.

Thank God God didn't make me Roman Catholic. It's bad enough having to put up with the weird logic that informs the Grand Tufti's actions against his fellow Christians. But compared to the logic employed by some of these Roman Catholic big wigs he makes more sense than Mr Spock, Captain. 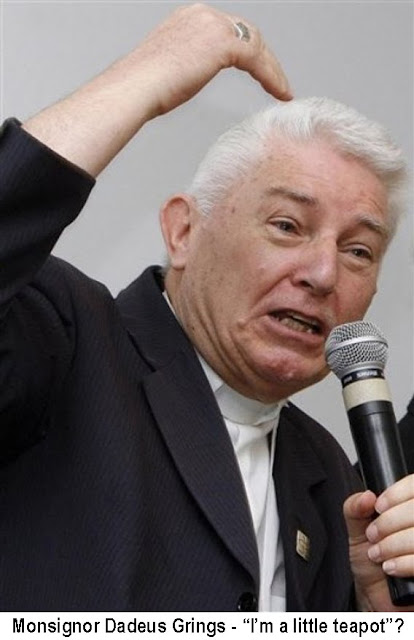