For more than a hundred years the Free Church of Scotland has been governed by a strict Calvinist tradition — the singing of hymns has been prohibited. The austere but hauntingly beautiful sound of unaccompanied psalms has been the only music permitted in a Church which believes in maintaining the sanctity of the Sabbath.

Now, in a move which could divide its congregations, the Church — known as the Wee Frees — is considering overturning the ban in a belated bid to move with the times. Not only might hymns be sung, it is suggested, but they could even be allowed a musical accompaniment. A report is due to be published in the next few days, which will then be discussed at the Church’s General Assembly later this month.

COMMENT: Ah, the slippery slope to having sex with animals in public. Have the righteous of the Free Church of Scotland learned nothing from the evil revisionist experiments of those evil Episcopalians in America. The time has come for a new John Knox to be raised from the ranks of Scottish gnosticism to take on the Great Satan of hymn singing. I suggest Father Kelvin of St. Mary's Cathedral, Glasgow, is the man for the job. 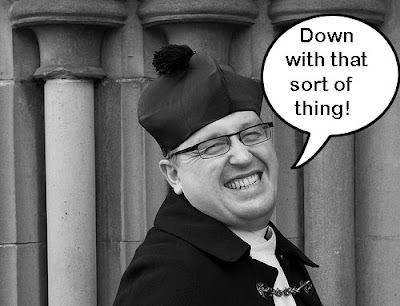