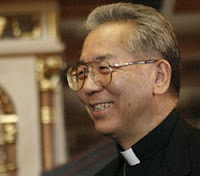 Archbishop Joseph Mitsuaki Takami of Nagasaki has met with UN Secretary General Ban Ki-Moon to appeal for the abolition of nuclear weapons and handed in a joint statement from himself and the Bishop of Hiroshima. Welcoming the archbishop on the opening day of the UN 2010 Review Conference of the Nuclear Non-Proliferation Treaty, Ban said that such an appeal from a religious leader, a Catholic bishop, is of great importance.

The archbishop handed the secretary general a copy of a joint statement that he and Bishop Atsumi Misue of Hiroshima issued last February calling on world leaders "to take a courageous step toward the total abolition of nuclear weapons and the realisation of a world without wars".

A separate report by the Catholic News Agency cited Pope Benedict calling for the "complete elimination" of nuclear weapons, urging all participating delegations at the UN meeting to make an effort to "weave a political and economic web of peace".

"Peace, in fact, rests on trust and on respect for promises made, not only on the balance of power," the pontiff noted. "In this spirit I encourage the initiatives that seek progressive disarmament and areas free of nuclear weapons, with a view to their complete elimination from the planet."

COMMENT: My ridiculous optimism is beginning to kick in again. With pretty much every denomination now calling, in earnest, for a nuclear free world, with Obama's moves towards this scenario and with the UN Secretary General's name being "Ban," I think we may be moving from "impossible" to "just a faint chance." And when that movement happens in any campaign it is time for people of goodwill to put their cynicism aside and to start to talk up that which they had previously only dreamt of. Prophesy is not about the foreseeing of the future. Prophesy is either the logical discernment of the future from the evidence of the present or, in its true Christian outworking, it is making what you want to happen actually happen by doing something about the future in the present in stead of just caring only for yourself and the here and now.