I know that California is renowned for its "bear" community but its very rare to see them up trees.

Police, firefighters and wildlife officials were in a standoff with a 200-pound black bear on the loose early Tuesday in a residential area of Oxnard.

Residents first spotted the bear running around the residential area on Vineyard Avenue about 2:15 a.m. Officers arrived on the scene and kept track of the bear as it ran through the neighborhood. The animal ran into Santa Clara Cemetery a few blocks away and climbed a tree next to a condominium complex. The bear descended and ran for a while longer before scaling another tree in the cemetery, where it found a perch about 25 feet above the ground.

Wardens from the state Department of Fish and Game shot the animal with tranquilizer darts, hoping to capture it and release it into a remote area. By 8 a.m., three wardens were on the scene and firefighters climbed a ladder and worked to hoist the sedated animal into a harness and lower it from the tree without injuring it.

Authorities are at a loss for how the bear, a rare sight in any residential area, made its way to a heavily populated part of the coastal city of Oxnard, just a few blocks from the 101 Freeway. The most likely scenario is that it wandered down from the hills during the night, crossing fields filled with inviting strawberries in blossom. 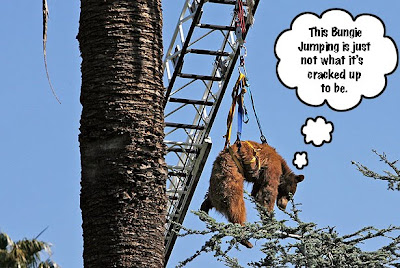 Thanks to IT for sending this
story into MadPriest Towers.