The following comment was dropped into the thread of a long forgotten post on LISBETH'S SITE, earlier today. 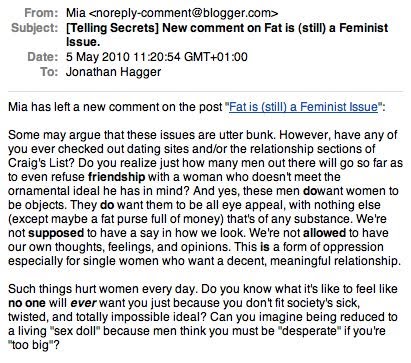 I have a question (and it's a serious one and not meant as a wind up).

Do women really believe that men don't have to put up with exactly the same as women? That men don't think that women are only interested in Coke advert men and george Clooney lookalikes? Do women really think that men don't look at their fat guts in the mirror and wish they never had to go out in public again? Do they think men don't notice how geeky looking and unattractive men are used as stereotypes in film and on television programmes? Do they think men don't have their self-confidence knocked by the constant idolising of the jock body in the media and the "girls together" jokes about screwing blokes who "work out" in pretty much every American TV programme nowadays?

Okay, I admit, we don't talk about it as much as women talk about their sexual objectification. But that's probably only because we are men and we think that women think that whinging is unmanly and, therefore, would lead to us having even less chance of getting laid - even by a fat girl.