It’s noon, and the past 36-48 hours have been spent trying to balance his sedative and pain medications so that he’s unconscious and comfortable, but not too heavily sedated, as that causes his heart rate to drop too low.

Chest x-rays last night and this morning look clear, showing improvement in the pneumonia that appeared in his right lung a couple of days ago. He’s getting respiratory therapy and suctioning to keep moving fluid out of his lungs.

Thanks again for your support and prayers; keep them up - breathing on his own will likely be the next big hurdle.

Decisions have been made. Some things have become more important than others.

And everything has a consequence.

The biggest consequence for me is that I have now updated my CDO Profile (that would be the Episcopal Church version of the e-Harmony matching system) to the following status: "Open to consider new position."

Posted by Tenon Saw at IT'S ALL A BIT POOR:

Depression sucks; it saps all one's "get up and go". Now I am more depressed because somebody thinks badly of me because I made a decision which I know is the right one, although I can see that one lad will be upset too.

Posted by Rachael at EPISCOPELICAN:

With the sore throat, headache, and now runny nose, I have obviously given birth to a fine young cold. No Mass for me tonight.

For more prayer requests, check out the
"Heart Thread" at BYZIGENOUS BUDDHAPALIAN.

Money raised so far for charity = $10.80.
Don't forget it is up to you to give your part of this to the charity of your own choice whenever you feel like doing so. 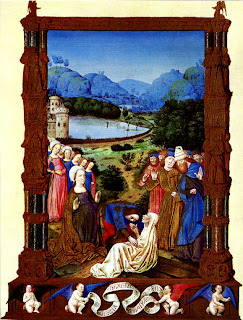 Let God arise and let His enemies be scattered; and let those who hate Him flee from His presence. As smoke vanishes, let them vanish; and as wax melts from the presence of fire, so let demons perish from the presence of those who love God and who sign themselves with the sign of the Cross and say in gladness: Hail, most precious and life-giving Cross of the Lord, for Thou drivest away the demons by the power of our Lord Jesus Christ crucified on thee, Who went down to hades and trampled on the power of the devil, and gave us thee, his venerable Cross, for driving away all enemies. O most precious and life-giving Cross of the Lord, help me, with our Holy Lady, the Virgin Mother of God, and with all the Saints throughout the ages. Amen.

In the Gallican usage, beginning about the seventh century, the Feast of the Cross was celebrated on May 3, and called "Crouchmas" (for "Cross Mass") or "Roodmas". When the Gallican and Roman practices were combined, the September date was assigned to commemorating the rescue of the Cross from the Sassanid Persians, and the May date was kept as the Finding of the Holy Cross or Invention of the True Cross to commemorate the finding. (In this context "invention" (from Latin invenire, "to find") does not have the modern sense of creating something new.) Pope John XXIII removed this duplication in 1960, so that the Roman Calendar now celebrates the Holy Cross only on September 14. May 3 is the date given in the Church of England's Book of Common Prayer liturgy, but the new Common Worship liturgy, following the Roman Catholic Church's lead, celebrates Holy Cross Day on September 14. (WIKIPEDIA)