I don't know if you have seen this on the news, but there is a major oil spill in the Gulf of Mexico. It threatens to become the worst one ever, and the oil should arrive here in my part of the world within a few days.
This is one of the most beautiful coasts anywhere, as well as one of the world's most biologically diverse regions and richest seafood sources. This will be an utter disaster.

If you would like to see some pictures of this part of the Gulf Coast, please see my Flickr album HERE:

We need prayers here, because BP, the company responsible for the disaster, are clearly in over their heads. If they can't cap the well, the oil could make it into the Gulf Stream and out into the Atlantic. This is going to get very ugly.

COMMENT: Yes, this has made the news headlines in the UK (and all over the world, I expect). At the moment we are being told that, although the conditions at sea are treachorous (8 foot waves), which is making the containment of the slick very difficult, there is, at this moment in time, less chance of the major disaster to wildlife and the environment that was originally expected. However, things could change for the worse at any time, so we continue to pray for protection for God's creation and for the families of the eleven oil rig workers who were lost when the accident occurred.

And kudos to the Man for getting his arse down there and not making the same mistake his uncaring predecessor did. 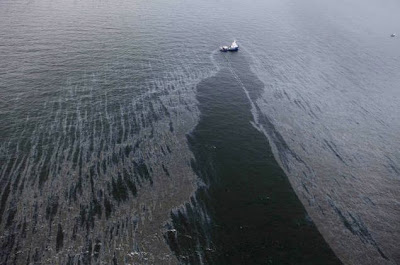