British Columbia’s education minister says she is looking into allegations by a Vancouver teacher who claims she was sent home from her job at a Catholic school because of her sexual orientation. Lisa Reimer alleges the principal at Little Flower Academy told her to stay home for the remainder of the school year, when her current contract expires, after parents complained about the fact that her lesbian partner recently had a baby. Reimer said she received the news earlier this week after taking two weeks off following the birth of her son. She had previously asked for parental leave but said the school refused.

“They (school administrators) said that they had lots of friends and family who were gay and they were completely supportive of that, but that families at LFA would not accept that,” Reimer told reporters on Wednesday.

A group called the Pride Education Network sent out a news release Wednesday on Reimer’s behalf, claiming the principal told her that parents were concerned “the girls might follow Ms. Reimer’s lead.”

Steve LeBel of the Pride Education Network, himself a former teacher, said, “Every girl in that school is going to know by now ...  and the message will be that our parents, our teachers, our principal thinks it’s fine to let someone go because they’re a lesbian. I think it’s absolutely the wrong message.” 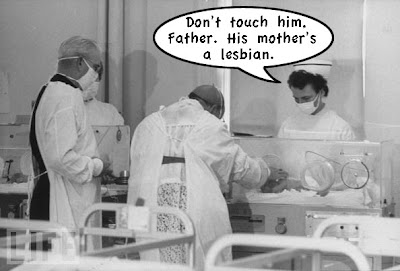