A former vicar-general in the archdiocese of Munich has claimed that he was pressurised last month into taking the blame for a mistake made 30 years ago by the then Archbishop of Munich, Joseph Ratzinger (now Pope Benedict), concerning the case of a paedophile priest.

Fr Gerhard Gruber has now said he did so only after coming under huge pressure from unnamed Catholic Church sources to take responsibility, so as to “take the pope out of the firing line”.

In a letter to a friend, seen by German weekly magazine Der Spiegel , Fr Gruber wrote that he was “begged” in numerous phone calls and after receiving a prepared statement by fax for him to sign. The magazine said Fr Gruber expresses unhappiness in the letter at being given the sole blame in public.

A spokesman for Munich archdiocese has dismissed the report as “completely made up”, saying Fr Gruber was at no point forced to sign anything but that he merely assisted in formulating the statement.

Victoria Police has called for sweeping changes to the way Melbourne's Catholic Church deals with sex crime allegations. Nearly 300 allegations of sexual abuse have been substantiated by church investigations since 1996, when the ''Melbourne Response'' was set up to deal with complaints. It is believed the abuses were perpetrated by approximately 100 priests. However, only one priest has been defrocked for abuse during the past 14 years.

Church sources say police are pushing for change because they do not want accused priests told about covert criminal investigations. Last year detectives feared the church's independent commissioner, Peter O'Callaghan, QC, may have compromised two covert investigations when he told two priests, through their lawyers, that they were being investigated. He did this without the consent of detectives, who had not yet interviewed the priests. Mr O'Callaghan's investigation is suspended when police begin theirs - and he argues that priests have a right to know.

Police - and some within the church - also want more direct support for abuse victims. They intervened after five victims last year told The Age they had concerns about the church's handling of their complaints. It can now be revealed that in August last year Mr O'Callaghan told an alleged victim that his alleged groping by a priest was unlikely to constitute a crime. In a letter he said: ''Without seeking to dissuade you from reporting the matter to police if you so desire, I must say that the conduct you described is unlikely to be held by a court as criminal conduct.'' Weeks later, police immediately assessed the same complaint as a potential sexual assault. They began an investigation and if the claim is proved it will constitute serious criminal conduct.

Mr O'Callaghan previously has said that if asked he would not comply with police requests to keep their inquiries confidential, saying priests have a right to know. ''I would have advised them, I would not consent to such a course.''

Archbishop Denis Hart last year publicly dismissed the need for any changes, saying ''because of its success, there is no need to review or fundamentally alter'' the Melbourne Response.

A German bishop is offering his resignation after a flap over allegations of physical abuse and financial misconduct. Augsburg Bishop Walter Mixa wrote a letter to Pope Benedict XVI Wednesday evening offering to resign as bishop and as Germany's Roman Catholic military chaplain. He wrote that the "continuing public discussion" about him had "seriously burdened priests and the faithful."

Mixa has been accused of hitting children decades ago when he was a priest. He initially denied ever using violence against youngsters but later acknowledged he may have slapped children. On Tuesday, he offered an apology.

"I am pained in my heart and sorry for causing many people grief," Mixa said in a statement without specifying what he meant.

Adding to Mixa's troubles, a special investigator has said there were financial irregularities at a children's home under Mixa's responsibility.

Advocates for victims of sexual abuse by priests are protesting plans by a retired Vatican cardinal to celebrate Mass in Washington, D.C. Cardinal Dario Castrillon Hoyos is scheduled to celebrate a special Latin Mass on Saturday in honor of the fifth anniversary of Pope Benedict XVI's inauguration. However, the retired cardinal wrote a letter in 2001 congratulating a French bishop for shielding a priest who was convicted of raping minors.

The Survivors Network of those Abused by Priests has asked the pope and the archbishop of Washington to stop the cardinal's visit.

The archdiocese says SNAP should take the issue up with the Paulus Institute, which is organizing the Mass.

Pope Benedict XVI told his weekly public audience on Wednesday in St Peter's Square that he had told victims of abuse during his recent trip to Malta that he "shared their suffering ... assuring them of church action".

The Vatican has issued a statement saying Benedict had told the men during the private meeting that the church would do everything in its power to bring justice to abusive priests and would implement "effective measures" to protect children.

Benedict's words on Wednesday are his first public comment on the scandal. 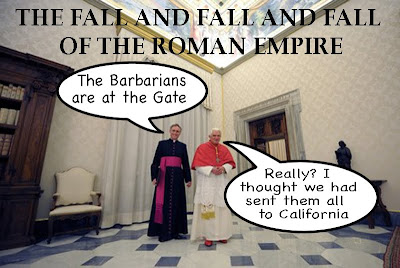