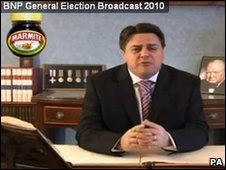 The maker of Marmite is threatening legal action against the British National Party to stop it from using a jar of the spread in a party broadcast. Unilever said it had not given the BNP permission to use its product and was looking into taking out an injunction. The BNP's online broadcast was removed from its website, but it can still be seen on video hosting website YouTube.

The party initially said the clip was a spoof, but then claimed it had not been responsible for adding the Marmite jar. In a statement, BNP leader Nick Griffin said the jar had "apparently" been inserted by "one of the people to whom we had given the broadcast to review".

However, Mr Griffin went on to say that the Marmite jar had been added in reaction to a 2009 advertising campaign for Marmite which he said mocked the BNP. In the Marmite campaign at the time of the European Parliament election, two spoof political parties, the Love Party and the Hate Party, compete in a mock election.

The BNP claims the Hate Party was "clearly based" on itself. 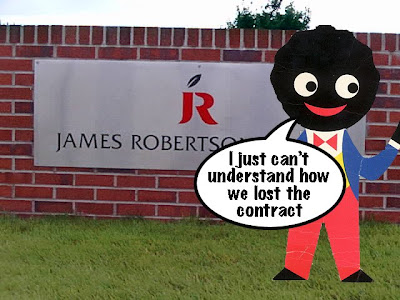 Thanks to Themethatisme for sending the link
to this story through to MadPriest Towers.